BS Yeddyurappa particularly targeted HD Kumaraswamy and his father, former prime minister HD Deve Gowda, often with personal attacks, and told the Congress members that "the father and sons will finish the Congress." 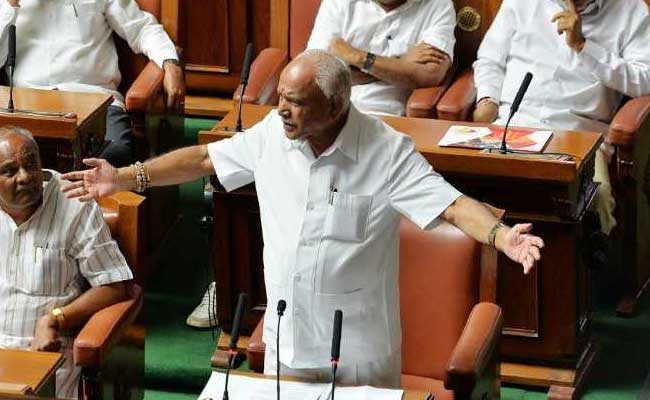 Bengaluru: In a fierce attack on the coalition government headed by HD Kumaraswamy, BJP state chief BS Yeddyurappa on Friday termed it "unholy" and announced a state-wide bandh on Monday if farm loans worth Rs 53,000 crore were not waived by then.

In a combative mode, Mr Yeddyurappa particularly targeted HD Kumaraswamy and his father, former prime minister HD Deve Gowda, often with personal attacks, and told the Congress members that "the father and sons will finish the Congress."

Repeatedly taunting Congress members during his speech after the chief minister sought the vote of confidence in the assembly, Mr Yeddyurappa alleged that the chief minister was known for "betrayals" and told them he had no objection "if you want to go in the sinking ship of Kumaraswamy."

Mr Yeddyurappa even went to the extent of saying, "our fight is not against the Congress but against the Gowda family..."

He said the Congress-JDS coalition had defied the popular mandate and the government was on "daily wages."

"This is an unholy coalition...", Mr Yeddyurappa said, adding, both the parties had joined hands only with the sole aim of keeping the BJP out of power.

Hitting out at the JDS, he said its candidates had lost deposit in 121 constituencies and it had not won even a single seat in 16 districts.

Mr Yeddyurappa said he had committed an "unpardonable crime" by supporting Mr Kumaraswamy as head of the BJP-JDS coalition in 2006 and he was seeking apology from the people for the same.

The BJP leader said Mr Kumaraswamy had "betrayed" him by not transferring power to him in 2007 after being the chief minister for 20 months, as per the agreement between the two parties.

Tearing into the Congress-JDS post-poll alliance, he said, "What morality is it to kiss the JDS leadership who are out to finish Congress and Siddaramaiah? There is only one ideology and that is to keep BJP away from power. This unholy alliance will ruin the state. People are cursing Congress for joining JDS," he said.

"We failed to get 113 seats (for majority) but did JDS or Congress get the majority. Congress is reduced from 122 seats to 78 seats," Mr Yeddyurappa said.

Turning to state senior Congress leader DK Shivakumar, who was the key person who held the party MLAs flock together, Mr Yeddyurappa told him, "You will repent Shivakumar. You did the unpardonable crime of protecting everyone (MLAs). You protected the person (Kumaraswamy) who had betrayed the people of the state."

He also defended the invitation extended to him by Governor Vajubhai Vala to form the government. It was a convention that had been followed in several cases, he said.

Promoted
Listen to the latest songs, only on JioSaavn.com
Mr Yeddyurappa admitted that he did contact some MLAs in the rival camp to muster numbers, but "there is nothing wrong with it. I wanted to tell them (the MLAs) not to give an opportunity to form an unholy alliance with the father and son."

Reminding Mr Kumaraswamy of the election promise to waive farm loan within 24 hours of coming to power, Mr Yeddyurappa said farm loan borrowed from cooperatives and nationalised banks should be waived..if done completely, we will support it wholeheartedly. Else, on Monday, we will hold a Karnataka bandh and teach JDS a lesson," he said."