DK Shivakumar money laundering case: The case was based on an Income Tax Department chargesheet filed against Shivakumar for alleged tax evasion and hawala dealings. 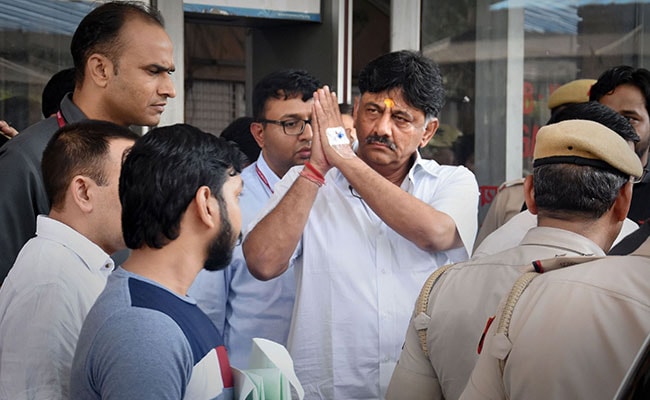 Karnataka Congress chief DK Shivakumar is out on bail in the money laundering case. (File)

The Enforcement Directorate or ED has filed a chargesheet under the anti-money laundering law against Karnataka Congress president DK Shivakumar and others, officials said today.

The prosecution complaint has been filed under various sections of the Prevention of Money Laundering Act (PMLA) before a Delhi court, they said.

The federal probe agency had in September 2018 registered a money laundering case against DK Shivakumar, A Haumanthaiah, an employee at the Karnataka Bhavan in New Delhi, and other people.

The case was based on an Income Tax Department chargesheet filed against Mr Shivakumar and others before a court in Bengaluru for alleged tax evasion and hawala dealings.

The Income Tax department has accused Mr Shivakumar and his associate SK Sharma of transporting huge amount of unaccounted cash on a regular basis through 'hawala' channels with the help of three other accused.

Mr Shivakumar, 60, was arrested by the Enforcement Directorate in this case in 2019, and a number of people and associates, including his daughter Aisshwarya and Congress MLA Lakshmi Hebbalkar, were questioned by the agency.

The Congress leader, a former cabinet minister of Karnataka, is out on bail in the money laundering case.