"They have been sent to the hospital. After the final assessment, we will see how to discard the debris", Sunil Aggarwal, Additional Director General of Police, said. 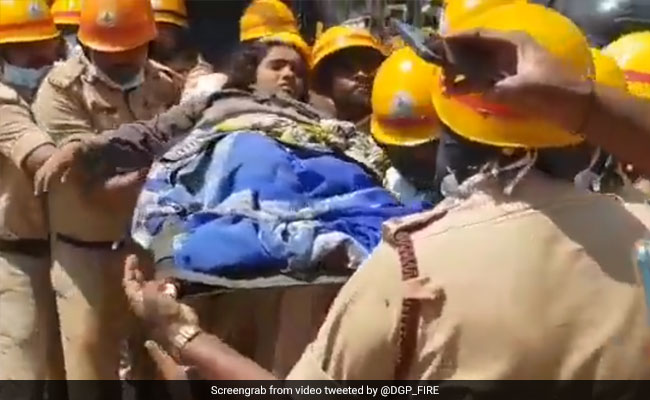 Sangeetha was carried out on a stretcher by nearly a dozen officials engaged in rescue operations.

For Sangeetha Kokare and her husband Dilip, time was running out - buried under the debris of an under-construction building that collapsed in Karnataka's Dharwad on Tuesday, killing 15. Today, after being stuck for nearly 72 hours without food or water, they were finally rescued.

Sangeetha was carried out on a stretcher by nearly a dozen officials engaged in rescue operations. A video, shared by senior Karnataka police officer MN Reddi showed officials wearing yellow hard hats carrying Sangeetha - strapped to the stretcher, visibly scared and shocked - out of a tunnel they had dug into the rubble to get access to those trapped underneath.

#dharwadbuildingcollapse
Husband and wife ( Dilip and Sangeetha) rescued alive by KSFES after about 70 hrs ! pic.twitter.com/MFfEzu4E4C

Soon after, her husband is carried out from the same tunnel by rescue officials on their shoulders.

The couple's condition is said to be stable.

"They have been sent to the hospital. After the final assessment, we will see how to discard the debris", Sunil Aggarwal, Additional Director General of Police, said.

64 people have been rescued from the debris since Tuesday, three of them today. Earlier in the day, a man was safely rescued after being stuck for 62 hours.

However, officials fear as many as four people could still be trapped.

The four-storey building, some portions of which were under construction, crumbled in Dharwad's Kumareshwar Nagar, about 400 kilometres north of Bengaluru on Tuesday afternoon.

A magisterial inquiry into the collapse has been ordered by Chief Minister HD Kumaraswamy, however, the opposition has asked for a "judicial probe by a sitting high court judge".

Four of the five owners of the construction company had surrendered on Tuesday night.