Among the promises in the Congress manifesto are creation of 15 to 20 lakh jobs a year, setting up of 50-bed Ayush hospitals, freeing the state from malnutrition. 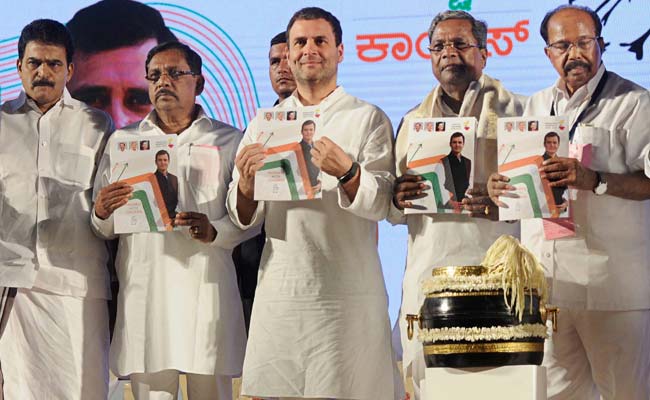 Managluru: Congress president Rahul Gandhi on Friday released the party's election manifesto for the Karnataka Assembly polls next month, promising the creation of one crore jobs over the next five years.

Mr Gandhi looked none the worse for wear after a turbulent flight from Delhi to Hubballi in a private plane on Thursday morning. He didn't even mention the issue as he continued with his campaign in the coastal Uttara Kannada district. On Friday, it was time for Dakshina Kannada district and the manifesto release. The district has been known for communal tension and having ardent Hindutva supporters - so there would have been significance in the choice of the place for the manifesto release.

He made a reference also to Basaveshwara, the 12th century spiritual leader of the Lingayats, saying the Congress was following his philosophy.

He said the BJP manifesto would be decided by three or four BJP leaders and that there would a lot of "unwritten things" in that manifesto including corruption and the idea of the Reddy brothers. Janardhan Reddy is a mining millionaire who has been accused of massive illegal iron ore mining scams - and whose two brothers have been given BJP tickets.

Among the promises in the manifesto are creation of 15 to 20 lakh jobs a year, setting up of 50-bed Ayush hospitals, freeing the state from malnutrition, 65 lakh tourism jobs to be created and 125 thousand crore rupees to be spent on irrigation.

Unsurprisingly, the BJP was not impressed. The party's Prakash Javdekar said, "The Congress manifesto is full of lies, it is fake. There is no vision or direction in it. They don't even have the calculations of what they have achieved over the last five years. They were in power for five years What did they even do? In the last five years, the number of crimes in the state, suicides, death of children has all increased. They also promised to strengthen the Lokayukta, but they have failed. Instead, they weakened the Lokayukta. They attacked the Lokayukta and took away all its powers."

Promoted
Listen to the latest songs, only on JioSaavn.com
Union minister Ananth Kumar added, "The Congress has accepted that they have failed to fulfil over 50 promises that they mentioned in their 2013 election manifesto. This is their plight of the state - more than 2,000 farmers have committed suicide. There is so much corruption in the state. And there are all kinds of mafias - sand mafia, PWD mafia, mining mafia."

Karnataka votes on May 12 and results will be declared on May 15.
Comments
Karnataka ElectionRahul Gandhi