Although the arrests have sparked shock and anger, police claim that the charges against the two women "are not excessive". 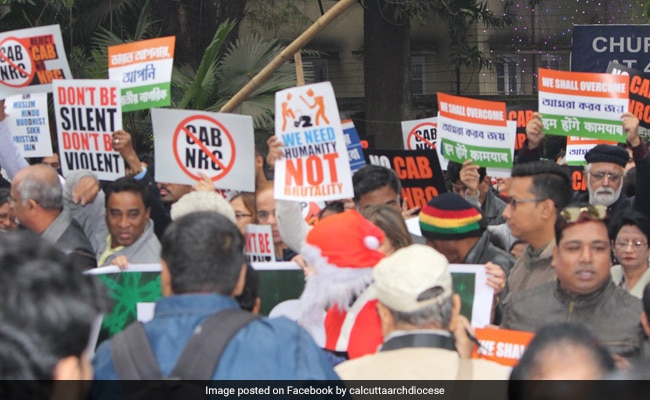 Protests against CAA and NRC have erupted across the country.

Two women, the mother of a student and the head teacher, have been arrested in a sedition case filed in Karnataka against a private school over a play on the controversial Citizenship (Amendment) Act earlier this month.

The play was staged in the school run by the Shaheen Group of Institutions by students of Class 4, 5 and 6 on January 21. Five days later, the school was charged by the police with sedition over remarks allegedly made against Prime Minister Narendra Modi.

The school play caught the attention of the police when a clip of the event was circulated online. The police claim they received a complaint against the play and filed the case on Monday.

A team of police officers arrived at the school soon afterwards and questioned teachers and children who acted in the play. The mother of the student who allegedly spoke the words against PM Modi, Nazbunissa Minsa, and the head teacher, Fareeda Begum, were arrested on Thursday, senior police officer T Sreedhara told NDTV.

"They are trying for bail, but are now in judicial custody," Mr Sreedhara said.

The arrests sparked shock and anger, but the officer claimed that the charges against the two women "are not excessive". Mr Shreedhara said that while the two have not been charged under sedition or other serious provisions of the law so far, the final charges against them will be made on the basis of the ongoing investigation.

According to the police officer, the mother has been charged with abetting the use of abusive language. "She tutored her daughter to introduce fresh words that were not there in the original script," he told NDTV. The head teacher was taken into custody because the play was held with her knowledge and permission.

In a bite shared with NDTV, Nazbunissa Minsa was heard saying that she was to blame for the play. "Nobody else is responsible for this -- just me," she said.

Nilesh Rakshala, the man who filed the case against the school, maintained that the school had committed a serious offence. "Innocent children are being used by the school management to stage a play against the National Register of Citizens and the Citizenship Amendment Act, both initiatives brought by honourable Prime Minister Narendra Modi. This play staged by the school has dishonoured the high office of the Prime Minister and helped propagate anti-national sentiments among the public," he told mediapersons.

However, questions have been raised on the rationale behind carrying out arrests for relatively trivial reasons. "Filing such an FIR and carrying out arrests are a blatant abuse of state power. The Supreme Court has limited  the application of sedition to acts involving intention or tendency to create disturbance or incitement to violence, which a play by children is certainly not. This only shows how much the government fears criticism in any form, the efforts it will go to stifle questions and the fact that such a government can no longer be called democratic," Maitreye, a Bengaluru-based advocate, told NDTV.

The Shaheen management has expressed its willingness to help with the probe. "We are citizens of this great nation.  We will obey our courts and police. We will do everything in our capacity to cooperate with the investigation," said Abdul Subhan, a representative of the school.

A similar controversy had erupted a few weeks ago, when a school in Karnataka's Dakshina Kannada district staged a play that showed school children re-enacting the 1992 demolition of the Babri Masjid at an event attended by Puducherry Lt Governor Kiran Bedi. Police filed cases against five people, including Kalladka Prabhakar Bhat, the school principal and an RSS leader, after Twitter erupted in outrage.