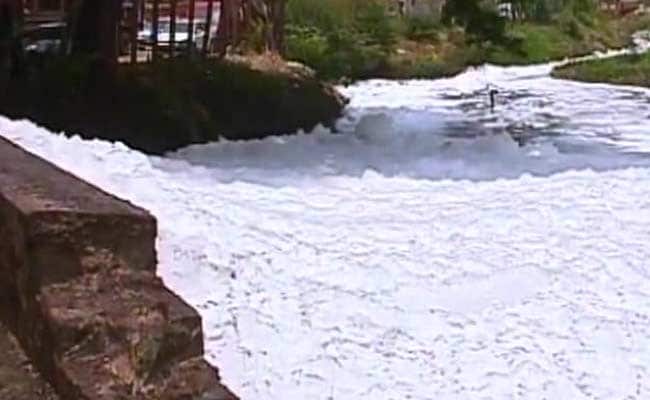 Bengaluru: Members of the Central Pollution Control Board or CPCB visited the Varthur lake in Bengaluru on Saturday after repeated complaints from angry residents to local authorities about the spilling of toxic water into the roads of the Whitefield area in the city.

"Today the CPBC team had visited the Varthur lake, they have taken the samples from two-three different places and they would be giving a detailed report on Wednesday on the lake situation. They would be suggesting a short term plan and a long term solution also for this lake," PC Mohan, a BJP lawmaker of the area, told NDTV.

The lake, the second largest in Bengaluru, has plenty of white froth that of late has been overflowing into the roads. This is due to 500 million litres of untreated sewage flowing into the lake everyday.

"The state goverment's and the Bangalore Development Authority or BDA's laid back attitude has led to this situation," said Mr Mohan.

"This is a mix of detergent, urine and faecal matter. It is as filthy as it gets. And this in an area that is one of the largest revenue generators in the country, the Whitefield Industrial Area," Elan Kulandaivelu, an entrepreneur who lives near the lake, had earlier told ndtv.

At the Indian Institute of Science, Professor TV Ramachandra, who has been studying the Varthur Lake since 1997, confirmed that the pollution has been getting worse year by year.

"Untreated sewage is entering the water...one part, the nitrates are carcinogenic, the other, phosphates are causing the froth and shows how we are misusing this non-renewable resource," he said.

But Dr Vaman Acharya, chairperson of the state's Pollution Control said the froth is not a cause for worry. It's only really about bad smell, he said.

Dr Acharya said it will take the authorities at least a year to clean the lake if they begin now. Meanwhile, the administration plans to set up more sewage plants across the city.