The two acres of land was acquired by the Bangalore Development Authority in 2004 to form Arkavathi Layout, but was allegedly denotified when BS Yeddyurappa was the chief minister in 2008. 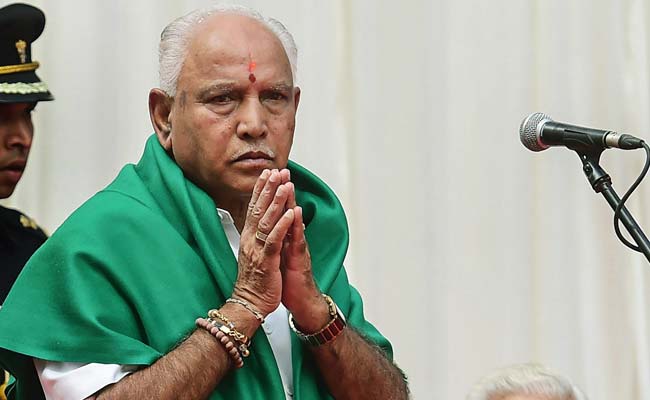 In all, there were five complaints against BS Yeddyurappa of which four were quashed earlier (File Photo)

In a big relief to BJP Karnataka chief and former chief minister BS Yeddyurappa, a Special Court on Tuesday quashed a case pertaining to alleged illegal denotification of a piece of land at Rachenahalli in Karnataka's Bengaluru city.

The two acres of land was acquired by the Bangalore Development Authority in 2004 to form Arkavathi Layout, but was allegedly denotified when Mr Yeddyurappa was the chief minister in 2008.

Terming it as illegal, two litigants, Sirajin Basha and Balaraj had moved the special court.

Defence lawyer Sandeep Patil told PTI that the special court judge BV Patil quashed the matter as the sanction given by the then Governor Hansraj Bhardwaj to try Mr Yeddyurappa in 2011 was set aside by the Karnataka High Court.

The same case was tried by the CBI court earlier and was found to be false, he said.

"The case was quashed on two scores - one there was no sanction at all because it was already quashed by the high court and secondly because it was tried by the CBI court earlier and found to be false. So it had to end like this," he said.

In all, there were five complaints against Mr Yeddyurappa of which four were quashed earlier.

Following the quashing of this case, BJP state general secretary N Ravi Kumar termed it as "a victory of truth and justice".

"Some people have made it their business to tarnish the image of Yeddyurappa by levelling false allegations," he said in a press release.

Postal Ballot Facility For Those Infected With Covid In Karnataka Bypolls