The demolition of illegally constructed temples has snowballed into a major political issue, with opposition Congress and many legislators of the ruling BJP expressing anger over the demolition. 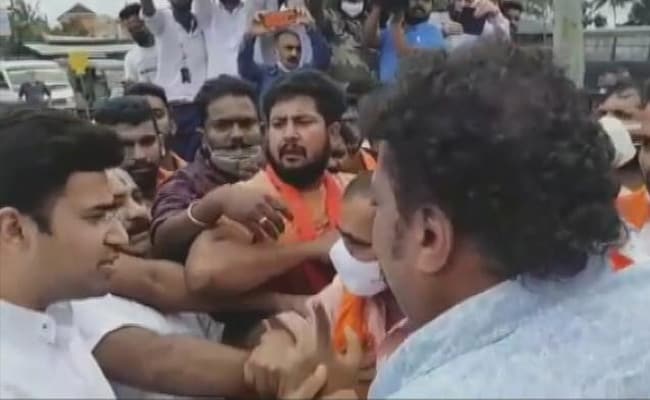 The two MPs faced protests over the demolitions of illegally-constructed temples in the state.

BJP parliamentarians Tejasvi Surya and Pratap Simha on Thursday faced the anger of Hindu activists during their visit to inaugurate a private hospital in Karnataka's Chikkamagaluru district, about 250 km from state capital Bengaluru.

Videos of the incident showed the two MPs trying to pacify the crowd which was unhappy over the demolitions of temples in the state.

Later, speaking to reporters, Mr Surya accused the Congress of playing politics over the issue. "People know the Pseudo concern of the Congress for temples and deities. People understand who celebrated Tipu Jayanti and who destroyed statues," he said.

Mr Simha, meanwhile, admitted that people were upset with the demolition drive and promised that Chief minister Basavaraj Bommai will resolve the matter. "I understand the pain of people of the state over the demolition, their anger is justified. I am confident that the chief minister would look into it and solve it keeping in view the Supreme court Order," he said.

The state government has been carrying out the demolition of illegally constructed temples as per a Supreme Court directive. Last week, the Mahadevamma temple in Huchchagani village in Nanjangud taluk was demolished following a directive from the State Government based on  the order of the Supreme Court.

The demolition has snowballed into a major political issue, with opposition Congress and many legislators of the ruling BJP expressing anger over the demolition.

The chief minister has now directed district authorities not to take any hasty steps in demolishing illegally constructed temples. The Supreme Court order, Mr Bommai said, will be thoroughly studied and discussed at the cabinet meeting and a specific order given in the next two days.

Karnataka Assembly Passes 3 Bills, Including One Related To Identification Of Prisoners