Mohammed Gawan Madrasa Karnataka: A mob of around 60 people barged into the archaeologically-significant monument by breaking the lock of the gate, and raised slogans. 'Gulal' was also thrown inside the premises, it was alleged. 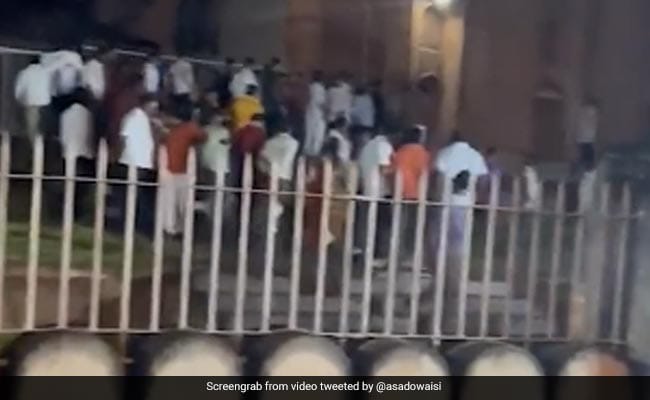 A mob barged into the mosque at Mohammed Gawan Madrasa, a heritage site in Karnataka's Bidar

A mob barged into Mohammed Gawan Madrasa, a mosque situated inside the heritage site in Karnataka's Bidar, by breaking open the locked gate, following which the police has cracked down and filed cases against nine people.

According to the complainant Mohammed Shafiuddin, who is a mosque committee member, the incident took place when a procession was passing near the place in the early hours of Thursday.

A mob of around 60 people barged into the archaeologically-significant monument by breaking the lock of the gate, and raised slogans. 'Gulal' was also thrown inside the premises, it was alleged.

The mob also threatened the security personnel deployed there when they raised an alarm.

"Visuals from historic Mahmud Gawan masjid & madrasa, Bidar, #Karnataka (5th October). Extremists broke the gate lock & attempted to desecrate. @bidar_police @BSBommai how can you allow this to happen? BJP is promoting such activity only to demean Muslims," Mr Owaisi alleged on his Twitter handle.

In his complaint, Shafiuddin said that the mob had "intentions to disturb peace, harmony and create violence" in this district headquarters town. He said such people have been active for a long time. They installed statues or photos on the premises and entered religious and government monuments, he said.

"This is also brought to your notice that these persons have been shouting slogans against the country and trying to instigate the other community," Shafiuddin alleged in his complaint.

He also appealed to the police to charge them under the stringent anti-terror law 'Unlawful Activities (Prevention) Act' or UAPA.

Police said they have tightened security around the madrasa following tension in the aftermath of the incident.