3 Firemen Killed As Building Collapses During Rescue Op In Jammu

A building, housing a saw mill on the ground floor, collapsed during a firefighting operation in Jammu. 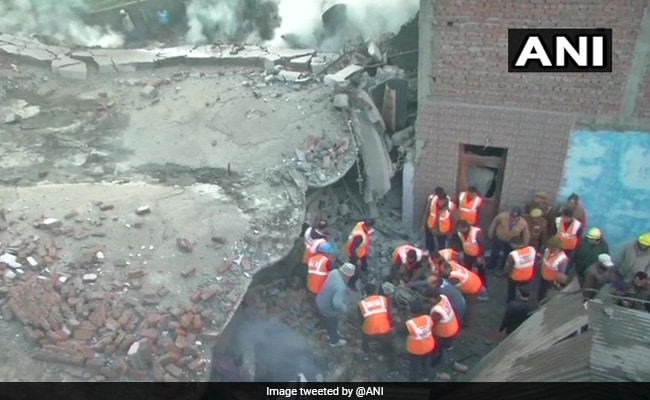 Three firemen were killed and six persons injured when a three-storey building collapsed in Jammu on Wednesday, officials said.

Director General of Fire and Emergency Services, VK Singh said the building, housing a saw mill on the ground floor, collapsed during a firefighting operation.

"We lost three personnel in the incident, while six persons -- four civilians and two firemen -- were rescued in an injured condition and were taken to a hospital," Mr Singh who supervised the rescue operation, told news agency PTI

"We have rescued four trapped civilians in the morning while two of our personnel suffered injuries. All the rescued persons were evacuated and taken to a hospital," Mr Singh said,

Lauding the role of the fire and emergency department in restricting the blaze in the congested area, Divisional Commissioner Sanjeev Verma said the firefighters did a tremendous job in controlling the fire and rescuing trapped civilians.

"It is a tragic incident and we are looking into the cause of the fire. It is a matter of investigation whether the building was unsafe," he told reporters.

An official of the NDRF said they got the call at around 6 am and joined the rescue effort around 8.30 am.

"The rescue operation took time as we have to make an approach through the debris to reach the trapped persons," he said, adding that no one else is believed to be trapped under the rubble.

Jammu: Five Of Family Die In Car Crash While Returning From Wedding Event