Around two dozen of Donald Trump's top Indian-American lieutenants were present at the Diwali celebrations in the Roosevelt Room on Tuesday. 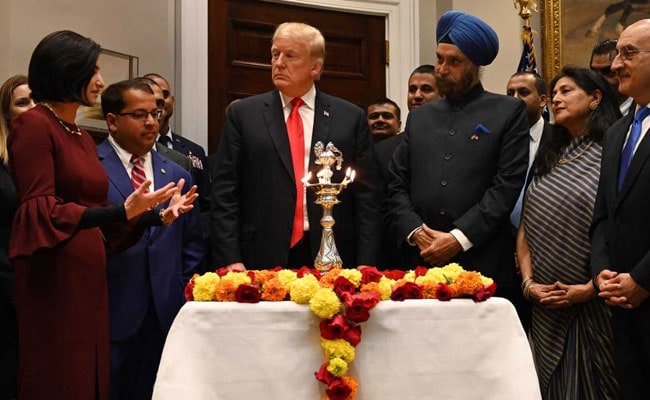 US President Donald Trump, who has appointed more than two dozen Indian-Americans to senior positions since he assumed office in 2017, praised them for their "incredible" performance in his administration.

"I'm grateful to have numerous Americans of Indian and Southeast Asian heritage who fulfill critical roles across my administration. And they've done an incredible job," Trump said as he hosted Diwali celebrations in the Roosevelt Room on Tuesday.

Except for the former South Carolina Governor Nikki Haley, around two dozen of his top Indian-American lieutenants were present at the celebrations.

Ms Haley, the first-Indian-American appointed to top Cabinet-level position, resigned last month as the US ambassador to the UN.

As a Diwali gift to the community, Trump surprised many by announcing that he has nominated his regulatory czar Neomi Jehangir Rao to the US Court of Appeals for the DC Circuit.

Ms Rao, 45, will replace the Supreme Court Justice Brett Kavanaugh in the US Court of Appeals for the DC Circuit, where he served earlier before heading to the apex court.

In eight years, former president Barack Obama had appointed more than 50 Indian-Americans to key administration positions, including Raj Shah as United States Agency for International Development administrator; Nisha Desai Biswal as the Assistant Secretary of State for South and Central Asia and Richard Verma as the US Ambassador to India.

By appointing more than two dozen Indian Americans in key administrative positions, Trump seems to be on the track to breaking the record set by his predecessor.

"Many of them are here today, including the Chairman of the Federal Communications Commissions, Ajit Pai," Trump said as he called upon him.

"Ajit, where's Ajit? Come here, Ajit. I just didn't like one decision he made, but that's all right," he said as the small audience burst into laughter. "Not even a little bit. But he's independent," said the president.

Seema Verma, who in her capacity as administrator of the Centers of Medicare and Medicaid Services, is playing a key role in healthcare reforms, Trump said.

"Chairman of the Federal Energy Regulatory Commission, Neil Chatterjee. Where is Neil? Good. Nice to see you," said the US president indicating that he personally knows each one of these Indian-Americans.

"The acting administrator of Drug Enforcement, and another person that I've become very close to, Uttam Dhillon," Trump said.