Police Chief's son Tyrone McAllister, was arrested on charges of attempted robbery, elder abuse and assault with a deadly weapon. 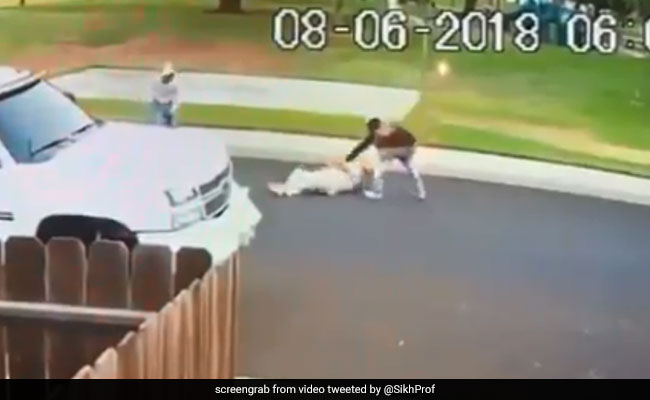 It shows a 71-year-old Sikh man, later identified as Sahib Singh Natt, strolling on a sidewalk by a park near his home in Manteca, California, at about 6 a.m. Monday. Two hooded men are seen walking up to Natt, confronting him. One of the men repeatedly kicks Natt, knocking him down and causing him to hit his head. They start walking away, but one of men turns back and kicks Natt three more times while he's already on the ground. The man spits on Natt before leaving him lying on the street, alone.

Natt, who does not speak English, couldn't understand what the men were saying, Manteca police said. He was hospitalized and later released.

The disturbing assault, which took place days after a different attack on a Sikh man in Central California, prompted calls for a hate crime investigation. It drew about 200 local residents to a rally at the park where the confrontation took place. It also jolted the greater Sikh community across the state, including in Union City, about 60 miles away.

There, at a National Night Out event on Tuesday, Sikh community members told Union City Police Chief Darryl McAllister about what happened and asked how they could help prevent such a "horrific crime" from taking place in their town.

Hours later, the Union City police chief received a phone call from Manteca police. McAllister said he was "disgusted" to learn that the suspect in the attack on the elderly Sikh man was his 18-year-old son.

"Words can barely describe how embarrassed, dejected, and hurt my wife, daughters, and I feel right now," McAllister wrote in a lengthy, emotional message on the Union City Police Department's Facebook page. "Violence and hatred is not what we have taught our children; intolerance for others is not even in our vocabulary, let alone our values."

His son, Tyrone McAllister, was arrested along with a 16-year-old on charges of attempted robbery, elder abuse and assault with a deadly weapon. Police say that one of them waived a firearm in the air as they left the scene of the attack. He has not filed a plea and has offered no comment.

Authorities are also investigating whether the incident "meets all of the legal elements for charging as a hate crime," Manteca police wrote in a news release.

The Union City police chief and his wife worked with Manteca police to help track down and arrest their son.

"Despite having the desire any parent would have in wanting to protect their child, my oath is (and always will be) to the law and my vow of integrity guides me through this horrendous difficulty," Darryl McAllister wrote in the Facebook post. "My stomach has been churning from the moment I learned this news."

McAllister said his son began running away and "getting involved in a bad crowd" a couple of years ago. "He pretty much divorced his friends and family, associating with people none of us knew."

He spent some time in a juvenile center after getting in trouble for theft-related crimes, and was again arrested for theft as an adult, his father wrote. After spending about three months in jail, he "has been wayward and has not returned to our family home for several months," McAllister wrote.

"It's difficult for us to comprehend how one of three kids who grew up with the same parents, under the same roof, with the same rules and same values and character could wander so far astray," McAllister said. His 18-year-old son has two sisters, McAllister said, "one corporate and the other about to start law school."

Hundreds of people, including many members of the local Sikh community, responded to the police chief's message thanking him for his honesty. Several people left comments saying their families have also grappled with similar kinds of pain.

"We are all parents and we all wish our kids choose the right path but sometimes one reason or another they can go different way," one local resident said. One member of the Sikh community urged others to show McAllister's son "love and compassion to help bring him back on the right path."

Natt is still sore from the attack but is recovering at home with his family, a relative of Natt's, Manjeet Singh Virk, told KCRA. The family is pleased authorities have made arrests in connection with the assault, but said the confrontation has shaken everyone. Natt will no longer be going on his early morning walks around the park, Virk said.

The incident in Manteca took place just about a week after a similar attack against a Sikh man about 25 miles away, in Stanislaus County.

Surjit Singh Malhi, 50, said he was putting up campaign signs for local Republican candidates on July 31 when two men started beating him on the head, shoulders and neck. The men vandalized his truck, spray-painting the message "Go back to your country" alongside a white supremacist symbol, he told KOVR.

Authorities are investigating the incident as a hate crime. Malhi was not seriously injured, he said.

He may have been targeted for his turban, he said, but that same turban may have also protected his skull from further injury.

"My turban saved me," Malhi said.