PM Modi congratulated Riddhiraj for his generosity and excellence in academics. 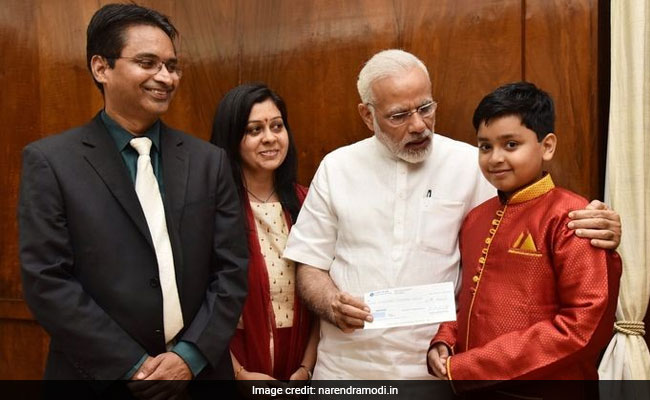 Riddhiraj Kumar, along with his mother, met PM Modi in Delhi and handed him the cheque.

New Delhi: An 10-year-old Indian-origin boy, who lives in Kuwait, has donated Rs 18,000 to the Indian Army Welfare Fund. Riddhiraj Kumar had won 80 Kuwait Dinars as prize money for the International Bench Mark Test for Improving Learning Award for Excellence from the Australian Council for Education Research.

Today, Riddhiraj Kumar, along with his mother, met Prime Minister Narendra Modi in Delhi and handed him a cheque of Rs. 18,000.

PM Modi congratulated Riddhiraj for his generosity and excellence in academics. He also tweeted:

Riddhiraj Kumar, a youngster from Kuwait met PM & presented a cheque of Rs.18,000 for the Indian Army Welfare Fund. https://t.co/hmC6Uqm0lWpic.twitter.com/zIojzIJyVS

To which Riddhiraj replied by thanking him:

Riddhiraj's mother Krupa Bhatt told PM Modi that she is working on 'Every Child is Genius Project' and is organising free seminars for the teachers in India, on identifying talents of the children. The PM also congratulated her for the commitment showing in spreading innovative learning projects.

Promoted
Listen to the latest songs, only on JioSaavn.com
This was not Riddhiraj's first meeting with Prime Minister Narendra Modi. In 2013, when he was just six years old, Riddhiraj had got the opportunity to meet Mr Modi, who was then the chief minister of Gujarat.

Riddhiraj Kumar, at six years of age, was able to name of states of India blindfolded by just feeling the shapes of the map and was able to list out all the countries of the world in just 90 seconds, according to reports.
Comments
Riddhiraj KumarIndian-Kuwaiti StudentIndian Army Welfare Fund