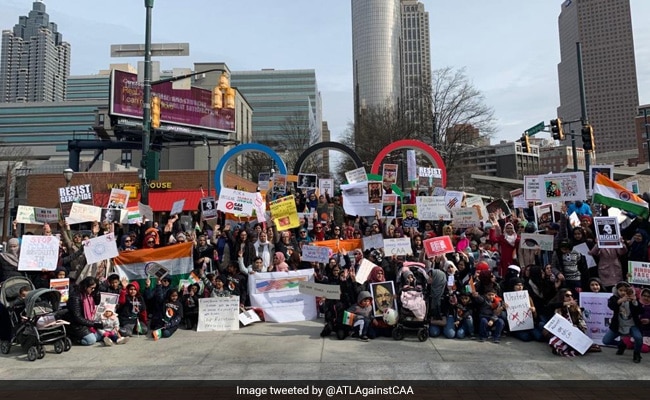 India's 71st Republic day celebrations in the US on Sunday were marred by protests and marches, albeit peaceful ones, against recent changes in the citizenship law by large number of Indian Americans in various cities of the country.

Among Indian-Americans, the Citizenship Amendment Act (CAA), 2019, however, also had a fair share of its supporters who sought to counter protesters by asserting that "India cares for Neighbouring Minorities" and "CAA Won't Impact Indian Citizens."

The supporters, however, appeared to be outnumbered by protesters, who held peaceful rallies and marches in various US cities, carrying anti-CAA banners and raising slogans against Prime Minister Narendra Modi and demanding CAA's repeal and revocation of the proposed National Register for Citizens. They raised the demand ruing that India's secular fabric is under threat.

In some of the cities, particularly New York, Chicago, Houston, Atlanta and San Francisco having Indian consulates, and at the Indian Embassy in Washington DC, the protestors shouted slogans like "Bharat Mata Ki Jai" and "Hindu, Muslim Sikh, Isai: Aapas Mein Saab Bhai Bhai". The protesters, however were countered by a number of Indian Americans who supported the enactment and congratulated the Modi Government for taking such a bold step. The largest gathering of anti-CAA protestors was reported from Chicago where Indian Americans gathered in large numbers and formed several mile-long human chain.

The anti-CAA protests in at least 30 US cities were organized by recently formed Coalition to Stop Genocide, comprising several organizations like Indian American Muslim Council (IAMC), Equality Labs, Black Lives Matter (BLM), Jewish Voice for Peace (JVP) and Hindus for Human Rights (HfHR). "The brutal crackdown by government in India on anti-CAA and anti-NRC protests has created a situation in which women in large numbers have come out on streets to challenge the divisive-communal-fascist agenda of the government," Magsaysay Award winner Sandeep Pandey said, addressing a gathering in Washington DC.

"It gives hope that democracy and Constitution can ultimately be saved by the common people from a government which is bent upon destroying them," he said.

IAMC president Ahsan Khan said from the Bay Area in California, the rally of Indian Americans represents an extension of the massive unrest in India against the ruling BJP government for its relentless attacks against the secular Constitution. "Indian Americans and people of conscience in the US are seeking accountability from the Hindu nationalist regime that wants to turn Indian Muslims into foreigners and render them stateless," said Mr Khan after the rally in San Francisco.

"Protests happening not only in India but around the world represent a global consensus against the draconian policies of the Modi-Shah government," said Dr Shaik Ubaid from New York. "All Indians are equal citizens and that is the foundational social contract between the Indian nation and its citizens," said Minhaj Khan from New Jersey.