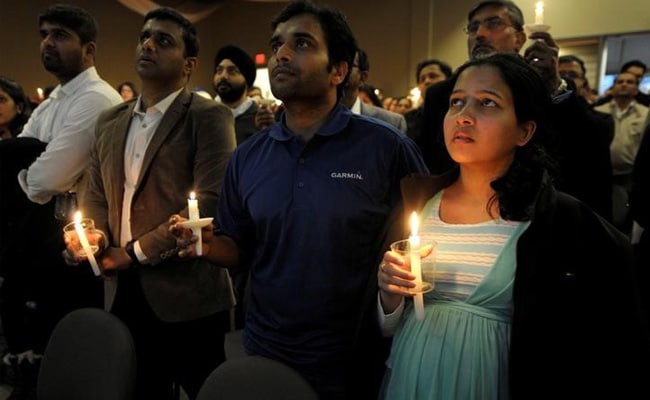 Alok Madasani, who was wounded in a bar shooting that killed Srinivas Kuchibhotla at a candlelight vigil

Houston, Texas: Hundreds of people, holding placards that called for peace and unity, took part in a prayer vigil in Kansas City to celebrate the life of Indian techie Srinivas Kuchibhotla, tragically cut short by an American navy veteran in an apparent hate crime. Marchers held pictures, banners and shouted, "We want peace"; "We love peace"; "Let us not leave our children"; "Unity is part of community, together we stand, divided we fall". Many of them carried candles and signs reading, "We don't support politics of hate."

The march for peace and prayer meeting was attended by friends of Mr Srinivas. Alok Madasani, another Indian who was wounded in the shooting on Wednesday, was on his crutches. The sisters of the third man, an American identified as Ian Grillot, injured that night when he intervened during the argument with the shooter US Navy veteran Adam Purinton, and Lieutenant Governor of Kansas Jeff Colyer, US Congressman Kevin Yoder, Olathe Mayor Mike Copeland, Olathe Police Chief Steven Menke, and other state officials also joined the prayer meet.

The prayer was conducted by priests from various religions at the Hindu Temple and Cultural Centre, Kansas City. It opened with Hindu, Christian, Jewish, Muslim and Sikh prayers and ended with participants singing John Lennon's 'Imagine'.

Volunteers handed out candles as visitors stoically made their way into the temple.

Earlier addressing the gathering, Alok Madasani remembered his nine years of friendship with Mr Srinivas. "Srini was the kindest person you would meet, full of love, care and compassion for everyone. He never uttered a word of hatred, a simple gossip, or a careless comment. He would always make sure everyone is doing fine and taken good care."

"The main reason why I am here is that's what my best friend, Srinivas, would have done. He would have been here for me," Mr Madasani said. "It's hard to believe he is not with me, not with us anymore. What happened that night is something we all wish didn't happen, but it happened."

He recalled how Mr Srinivas never complained about picking him up and driving him to work over a six-month period. "He waited till I bought a car. That's the kind of guy he was - is. I don't even want to use 'was' because we were friends for nine years and the memories are so fresh," Mr Madasani said.

He called the shooting "an isolated incident that doesn't reflect the true spirit of Kansas, the Midwest and the United States." "The United States of America, for us, has been one of selfless people, hardworking people."

Other friends who spoke there had similar words for Mr Srinivas. They described him as a positive, warm, kind, caring, brilliant, well-mannered and an absolutely outstanding human being.

Mr Srinivas, 32, was killed and Alok Madasani, of the same age, was injured in the shooting by the 51-year-old Adam Purinton screaming racial slurs and telling them to "get out of my country" and "terrorist" before he opened fire on them. He reportedly mistook them for immigrants from the Middle East.

The incident has led to fear among the minority Indian-American community, who feel being targeted by US President Donald Trump's controversial plan to ban travellers from certain countries to realise his campaign pledge of putting "America first."

At a news conference two days ago, Mr Srinivas's grieving wife Sunayana Dumala asked the US government what it would do to stop hate crimes against minorities. She said reports of bias against minorities make them afraid and wonder whether "do we belong here". Although Sunayana did not mention Donald Trump by name, she did say, "Not everyone will be harmful to this country."

At the vigil, Mayor Copeland encouraged people to come together. "One evil act does not divide a united community."

"We felt the fear, shared tears, felt pain, healing and outpouring of love and care at this moment from this community - we stand together with the Indian-American community today and everyday, we will not let one act of evil separate us or divide us."

Police chief Menke assured everyone, saying "we are one and we stand as one. we are here to deplore. we assure everyone that we will do everything to bring justice to the victim and victims family in this case."

"I am here for many reasons, to share the sadness, to support the community and search for answers. Evil will never overwhelm goodness, love will conquer all, and power of goodness will always prevail."

Lt Governor Colyer said, "We'll continue praying for the loved ones of Alok Madasani and Ian Grillot, and especially for the friends and family of Srinivas Kuchibhotla. We will overcome evil and move from darkness to light."

Reciting a prayer in Sanskrit that he learned recently, Lt Governor Colyer said, "May we move from darkness to light, from death to eternal light. Evil does exist, we have seen it, but so does goodness and evil will be driven away."

Assuring the Indian-Americans at the gathering, he said, "We will overcome this stray incident and live as one big strong community and we will change the world."

There has been an outpouring of support and fundraisers have been held for the victims.

Less than a week after the tragedy, thousands of strangers from around the world have opened up their wallets to comfort the victims' families. Three separate GoFundMe accounts have between them raised more than USD 1 million in donations, which they pledge to help with the families' medical expenses.

Promoted
Listen to the latest songs, only on JioSaavn.com
Mr Srinivas worked at GPS-maker Garmin headquarters in Olathe. Srinivas and his colleague Alok hailed from Hyderabad and Warangal respectively.