Ramniklal Jogiya, 74, had gone missing as he walked home from work and was later found dead in a nearby lane in Leicestershire. 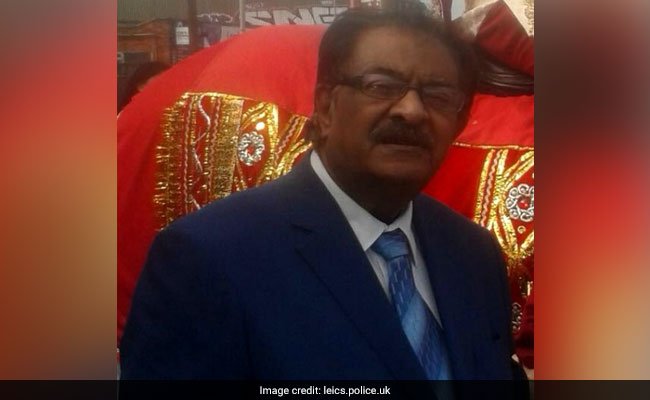 Ramniklal Jogiya was last seen on CCTV footage locking up and leaving his family's jewellery store.

Three men have been found guilty of kidnapping and ruthlessly killing a 74-year-old Indian-origin jeweller in the UK's Leicester city earlier this year.

Ramniklal Jogiya had gone missing as he walked home from his store on the city's famous "Golden Mile" of jewellery shops and was later found dead in a lane nearby, triggering a murder investigation by Leicestershire Police.

Following a five-week trial that ended at Birmingham Crown Court on Wednesday, Thomas Jervis, 24, and Charles Frances Mcauley, 20, were found guilty of murder. A third member of the gang, 20-year-old Callan Reeve, was found guilty of manslaughter. All three had denied killing MrJogiya and pleaded guilty to kidnap and robbery.

"Rarely have I investigated a crime so wicked and ruthless. The depravity, inhumanity and utter contempt they showed for their victim has caused untold anguish for his family and stunned the whole community," said Detective Chief Inspector David Swift-Rollinson from Leicestershire Police, who led the murder investigation.

"The only possible comfort left for the family is that the people responsible for this terrible crime will now be locked up for a very long time," he said.

The court heard how the gang had spent weeks planning to rob a safe at Jogiya's jewellery shop on Belgrave Road.

On the evening of January 24, they kidnapped him as he walked home, having locked up his shop for the night. After bundling him into a stolen van, they launched a horrific attack forcing him to hand over the keys to his shop, and torturing him until he told them the shop's alarm de-activation code and - critically - the combination code for a safe.

But despite their meticulous planning, they had not realized the safe was on a 12-hour delay, and they could not get into it. The terrified jeweller was then dumped and left to die alone in the middle of the countryside, said the police, who described the attack on the jeweller as "horrific and brutal".

All three gang members have been remanded into custody and will be sentenced on September 10.

A fourth suspect, 30-year-old Javon Roach, was acquitted of kidnap, robbery and murder.

At around 7.45 pm on the evening of January 24, Mr Jogiya locked up his shop in Belgrave Road and, as he did every night, set off on his short walk home. But he did not arrive, and by 8pm his family knew something was wrong.

Having visited the shop, phoned his mobile phone, and made other enquiries, the family raised the alarm and a major investigation was launched.

Tragically, around 10 am the following morning, the body of the "loving husband and devoted father of three" was found beside Leicester Airfield.

What had begun as a missing person inquiry immediately became a murder investigation.

Mr Jogiya had suffered a total of 27 injuries including broken ribs, wounds to his face, hands and arms, and had died from a major brain injury caused by a severe assault to his head. In short, he had been beaten to death.

During the six-month investigation, officers found CCTV images of Jogiya locking up the jewellers and beginning his walk home. Other images showed three men jumping out of a white transit van and bundling the terrified shopkeeper into the vehicle.

Further images showed that, about 50 minutes later, a man dressed in a burqa and pulling a shopping trolley entered Jogiya's shop. This person was seen to deactivate the shop alarm, go to the back of the shop where Jogiya kept a safe, before emerging a little time later,  seemingly empty-handed.

DCI Swift-Rollinson said: "These men had planned to kidnap and rob Mr Jogiya, but it went tragically wrong. They launched a sustained and ferocious attack on Mr Jogiya which ultimately killed him.

"Mr Jogiya's safe was set with a 12-hour delay every night when he went home, and even with the right combination code no-one could have accessed it until 12 hours later. Realising they could not get access to the Asian gold he kept in the safe, the gang drove away from the scene, empty-handed, throwing their victim's phone out of the window in the countryside.

"At some point they decided to dump Mr Jogiya in the middle of the open countryside, knowing he was a long way from help. Although he was still alive at this point, the injuries he had suffered were so severe that he could not be saved."

He described the jeweller as a "kind, gentle and devoted family man", who fell victim to the savage beating of a defenceless, elderly man, who was left to die. He added: "It almost defies words what they did to him. My thoughts, first and foremost, remain with Mr Jogiya's family.

"I thank them for their cooperation and patience with the investigation team, and I cannot praise more highly the dignity they have shown throughout this nightmare. I can only hope that the verdicts of the jury will bring them some, small, solace."

The police chief reached out to the wider community of jewellers from Belgrave Road, mostly of Indian origin, for their help with the "truly shocking" incident, which had an "awful impact" on the city.