The temple management released the first images of the final design of the traditional stone temple and the hand-carved stone pillars that have been taking shape in India, the Gulf News reported. 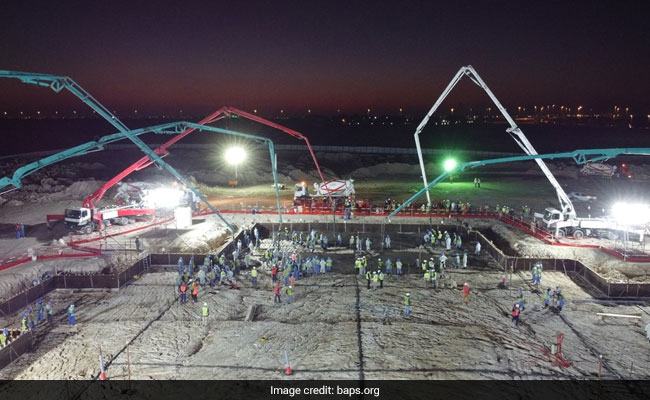 The majestic stone facade of the first Hindu temple under construction in Abu Dhabi will be adorned with scenes from Hindu epics, scriptures and ancient stories from India, as well as motifs popular in the Gulf countries, the local media reported Tuesday.

The temple management of the BAPS Hindu Mandir in Abu Dhabi has released the first images of the final design of the traditional stone temple and the hand-carved stone pillars that have been taking shape in India, the Gulf News reported.

The foundation stone of the temple was laid in April last year and work started in December.

Dubbed a spiritual oasis for global harmony, the temple's final master plan revealed in the video shows a massive amphitheatre overlooking the shrine, the daily reported.

A library, a classroom, a majlis and a community centre also feature within the compound in Abu Mureikhah area. Waterfalls flanking the steps to the entrance of the shrine, and water bodies circling the temple complex was seen in the video.

The design of the master plan was completed in early 2020, and optimised during the slowdown due to the coronavirus pandemic, a spokesperson of the temple told the Gulf News.

"This is the first time the visuals of the final design have been released through the video," said Ashok Kotecha, BAPS Hindu Mandir spokesperson.

"The work on the historic temple is progressing with the support of the community and guidance from leadership in India and the UAE. While navigating the challenges posed by COVID-19 and adhering to local practices during the pandemic, stone work has continued in India," Mr Kotecha said.

Ashok Kotecha said key values and tales of universal wisdom, and the authentic ancient art and architecture will be revived through the stone carvings used for the temple.

"The stories and carvings include diverse portions of India's geography and Hindu belief systems. This would include Mahabharata and Ramayana as well as the Puranas and regional histories. In fact, this Mandir will be uniquely identified by its intricate mandovar facade which will share many traditional tales from across India as well as unique designs from the Gulf," he said.

The intricate carvings of the temple range from figurines only a few inches tall to statues many metres high. The towering facade of the ground floor of the temple has also been revealed.

Ashok Kotecha said artisans have carved a whopping 25,000 cubic feet of stone in different sites in Rajasthan and Gujarat.

"It is a substantial portion of the Mandir. The marble is from Italy, and the sandstone is from Rajasthan," he said.

Currently, Swami Brahmavihari Das, the head of the temple and BAPS international spokesperson, is visiting the UAE to oversee the next stage of the foundation on site in preparation for the arrival of the carved stones which will be shipped and assembled in the first quarter of 2021, the daily said.

The fact that the temple construction is moving forward at such a steady pace is itself a statement of the vision of the leaders of the UAE and India and of the local community's commitment to make a lasting contribution to the country which has become their home and heart of success and growth, Mr Kotecha added.

Last month, Sheikh Abdullah Bin Zayed Al Nahyan, Minister of Foreign Affairs and International Cooperation, and Indian Ambassador to the UAE Pavan Kapoor met members of the BAPS Swaminarayan Sanstha, the organisation working on the construction of the temple, to review the progress of the construction.