Zomato said Uber Eats in India would discontinue operations and direct restaurants, delivery partners, and users to the Zomato platform, effective immediately - a change that already reflects on the Uber Eats app. Reports suggest the deal value is estimated at around $350 million. 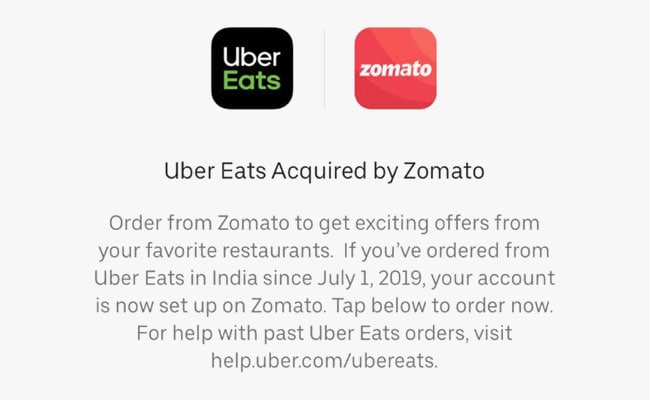 Zomato, which is backed by Alibaba's Ant Financial, buys Uber Eats in India for $350 million

Food delivery startup Zomato said today that it has agreed to buy Uber Technologies Inc's Indian food delivery business in an all-stock deal, which will give Uber a 10 per cent stake in Zomato, a food delivery company backed by Alibaba's Ant Financial.

A report suggests that the deal value is estimated at around $350 million or approximately Rs 2,492 crore.

Uber Technologies Inc's food delivery business Uber Eats struggled to take off in India after launching in 2017. The main reason for this is because Zomato and other local rival Swiggy dominated the food delivery market in India.

"We are proud to have pioneered restaurant discovery and to have created a leading food delivery business across more than 500 cities in India. This acquisition significantly strengthens our position in the category," said Deepinder Goyal, Founder and CEO of Zomato.

Zomato said Uber Eats in India would discontinue operations and direct restaurants, delivery partners, and users to the Zomato platform, effective immediately - a change that already reflects on the Uber Eats app.

Dara Khosrowshahi, CEO of Uber, said that Uber Eats team in India has achieved an incredible amount over the last two years. "India remains an exceptionally important market to Uber and we will continue to invest in growing our rides business, which is already the clear category leader," Mr Khosrowshahi said, adding, "We have been very impressed by Zomato's ability to grow rapidly in a capital-efficient manner and we wish them continued success."

"You can still get rides via the Uber app, which remains active and available. And you can still use Uber Eats if you're traveling outside India. Until then, we hope you will enjoy many more tasty moments and discover great restaurants around you on Zomato," the statement added.

Zomato had, on January 10, announced that it has secured $150 million in fresh funding from Ant Financial, a subsidiary of China-based giant Alibaba. The latest round of funding in Zomato, which currently values the company at over $3 billion, is part of $600 million funding round announced by Zomato CEO Deepinder Goyal at a Delhi event in December.