"We have issued notices to around 20 farmer leaders, including Yogendra Yadav. They all have been asked to send their replies within three days," the official said. 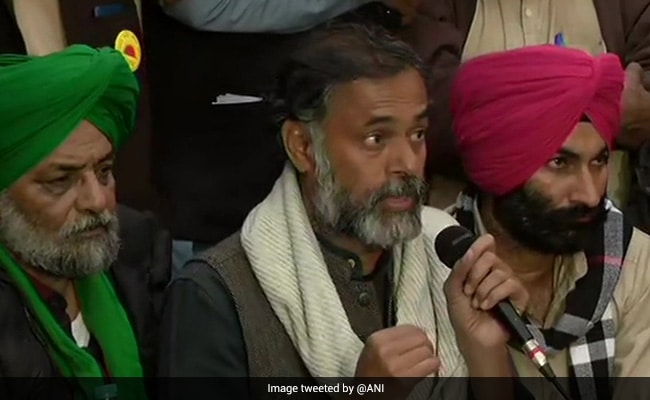 Delhi Police has issued notices to around 20 farmer leaders, including Yogendra Yadav (centre)

The Delhi Police has issued notices to around 20 farmer leaders, including Yogendra Yadav and Balbir Singh Rajewal, over the violence during the farmers' tractor rally, asking why legal action should not be taken against them, officials said on Thursday.

Police asked them to submit their responses within three days, an official said, adding that the notices have been issued to these farmer leaders as they did not follow the conditions set for the tractor parade on Tuesday.

The action comes after Delhi Police Commissioner SN Shrivastava on Wednesday alleged that farmer leaders were involved in the January 26 violence and warned that no culprit would be spared.

"We have issued notices to around 20 farmer leaders, including Yogendra Yadav. They all have been asked to send their replies within three days," the official said.

On Wednesday, the police had issued a notice to another farmer leader Darshan Pal, noting that the vandalisation at the Red Fort on Republic Day was "the most deplorable and anti-national act".

Meanwhile, the Delhi Police will also issue look out circular against farmer leaders who have been named in the FIRs registered after the violence on Republic Day.

The officials said that farmer leaders named in the FIRs will also be asked to surrender their passports.

The decisions have been taken following a series of meetings chaired by Union Home Minister Amit Shah since Tuesday when the large scale violence took place in the national capital during the farmers' tractor rally, a Home Ministry official said.

The tractor parade on Tuesday that was to highlight the demands of the farmer unions to repeal the three new agri laws turned violent as protesters deviated from routes, attacked police, overturned vehicles and hoisted a religious flag on the ramparts of the iconic Red Fort.

The Delhi Police on Wednesday said that 25 criminal cases were registered in connection with the violence in which 394 personnel were injured and 30 police vehicles damaged.