BJP leader Uma Bharti said that she will leave the house and stay in a hut or tent in front of a liquor shop or ahata' in an area where liquor is prohibited. 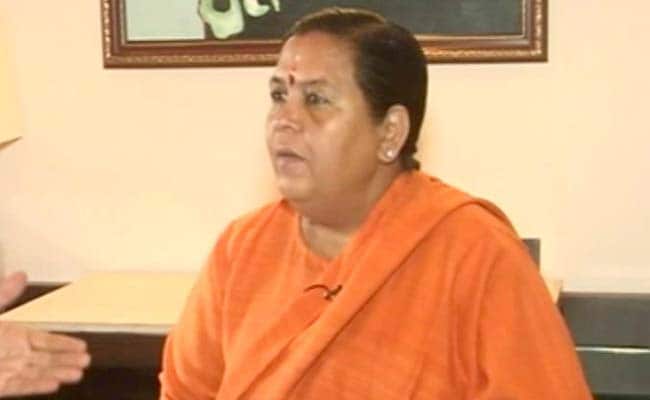 Uma Bharti's anti-liquor campaign will begin from Amarkantak in MP from November 7.

Senior BJP leader Uma Bharti on Friday said she will not stay in a house from November 7 to January 14 as part of her campaign against illegal liquor sale in Madhya Pradesh.

The former Union minister also announced that she wanted to contest the next Lok Sabha election from a state other than Madhya Pradesh and Uttar Pradesh.

Her anti-liquor campaign will begin from Amarkantak in MP, she said.

"From November 7 to Makar Sankranti on January 14, I will leave the house and stay in a hut or tent in front of a liquor shop or `ahata' in an area where liquor is prohibited, and organize a choupal (public meeting)," Ms Bharti said in a series of tweets.

`Ahata' is a place where liquor is consumed.

Despite the MP government closing liquor vends and ahatas in response to her campaign, they remained open after getting a stay from the courts and she became a laughing stock, Ms Bharti told reporters.

"This is the reason for launching this campaign, so that such things do not recur....and a controlled liquor distribution policy gets implemented in the state," she said.

Due to her new campaign, officials will remain alert about implementing chief minister Shivraj Singh Chouhan's announcements and not commit mistakes, especially the law department will not give an opportunity to liquor traders to obtain a stay from the courts, she added.

The senior BJP leader, however, praised Mr Chouhan for declaring the anti-liquor movement as a government campaign.

MP will become a role model for other states for framing a people-friendly liquor policy, she added.

The state government has announced that a de-addiction campaign will be run from October 2 to November 30.

But Uma Bharti had earlier said she will not take part in the government campaign and start her own campaign from November 7.

Earlier, speaking at a press conference, Uma Bharti expressed desire to contest the 2024 general elections from a state other than Madhya Pradesh and Uttar Pradesh.

Ms Bharti has been a Lok Sabha member from Khajuraho in Madhya Pradesh and Jhansi in Uttar Pradesh during her decades-long political career.

The 63-year-old politician was also a Union minister in Vajpayee and Modi cabinets.

Chief Minister Chouhan had proposed one-and-a-half years ago that she fight election from Madhya Pradesh but she turned the offer down, Ms Bharti claimed.

The constituencies she represented have seen development, she said.

"Shivraj ji, in every place from where I fight elections, big works get accomplished. In Khajuraho, a big railway project has come up and a project linking two rivers -- Ken in MP and Betwa in UP (has been finalised)," she said.

In Jhansi, a big defence office has come up and the constituency has attracted Rs 50,000-crore investment, the former CM said.

"I am thinking why not contest from a third state," she said, adding that she can win elections from any place.

Under her leadership the BJP won the 2003 Assembly polls in Madhya Pradesh and a year later she resigned as chief minister of her own will, she said.

"I left the comfort of Madhya Pradesh and Union ministership to serve the holy Ganga. For the tri-colour, I left chief minister's chair... For the cow, national flag and God I can lay down my life," said the BJP leader who was a key figure in the Ram temple movement.