Won't be deterred by attack on consulate in Jalalabad, says government 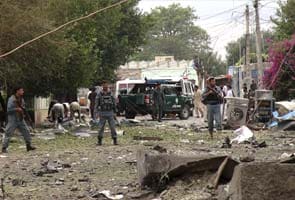 New Delhi: Hit by yet another suicide bomb attack on its mission in Jalalabad, India today said "terror machines" that operate from "beyond the borders" was the main threat to the security of Afghanistan and refused to be deterred from its commitment to assist the war-torn country.

At least 10 people were killed in the deadly attack targeting the Indian Consulate in Jalalabad city, bordering Pakistan, in the backdrop of reports that the ISI-backed Haqqani network among others were again plotting to attack Indian interests in Afghanistan.

"This attack has once again highlighted that the main threat to Afghanistan's security and stability stems from terrorism and the terror machine that continues to operate from beyond its borders," Ministry of External Affairs (MEA) Spokesperson Syed Akbaruddin said.

However, he asserted that India would not be deterred by this attack and will continue to assist Afghanistan in its reconstruction and development effort.

"This was clearly an attack not just against India but an attack against the efforts to help the Afghan people overcome the tragic hardships they have endured due to several decades of war," he said.

This is the second strike on the Consulate which was earlier attacked in 2007.

It is understood that Indian government had inputs about possible terror attacks against its consulates including the one in Jalalabad following which a team, comprising security officials, visited the consulates and the embassy in Kabul last week. Apart from Jalalabad, India has consulates in three more places - Herat, Mazare-i-Sharif and Kandahar.

As per the recent intelligence inputs, apart from Haqqanis, the security threat was also from smaller militant groups based in Pakistan.

Meanwhile, Mr Akbaruddin said India wishes to express its deep gratitude to the brave Afghan security personnel who laid down their lives while protecting the Indian Consulate.

Promoted
Listen to the latest songs, only on JioSaavn.com
"We wish to express our grief and condolences to the families of the innocent Afghan civilians who also lost their lives during this attack," he said.