With Eye On 2022, Priyanka Gandhi Vadra To Step Up UP Tours: Report

Priyanka Gandhi Vadra is ready to hit the ground in the state, following the Congress's debacle in the recent Lok Sabha election 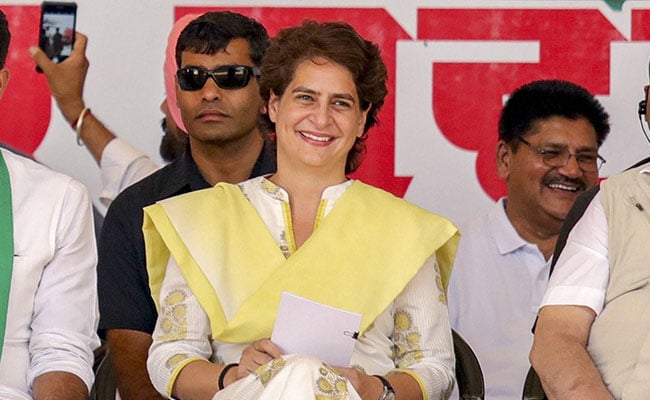 In a bid to infuse fresh energy in the party organisation and with the 2022 Uttar Pradesh Assembly polls in mind, Congress general secretary Priyanka Gandhi Vadra will increase the frequency of her tours to the state and meet party workers at least twice a week, sources said on Sunday.

The All India Congress Committee (AICC) in-charge of eastern Uttar Pradesh is ready to hit the ground in the state, following the Congress's debacle in the recent Lok Sabha election, in order to strengthen the party organisation in time for the 2022 Assembly polls.

In a bid to ensure a direct communication with the party workers, Priyanka Gandhi will meet them twice a week without prior appointments, the sources said.

"It emerged from the review meetings held after the Lok Sabha polls that there should be a greater coordination and communication between the leaders and the workers. For this, it has been decided that Priyanka Gandhi will meet the party workers at least twice a week," a Congress leader said on the condition of anonymity.

"The frequency of her tours to Uttar Pradesh will also increase in the near future," he added.

The plan to step up her Uttar Pradesh tours and establish a direct communication with the party workers comes days after Priyanka Gandhi, during a visit to Raebareli, told the workers that they had let down the grand old party in the Lok Sabha polls.

Accompanied by her mother and United Progressive Alliance (UPA) chairperson Sonia Gandhi, who visited her parliamentary constituency last Wednesday, Priyanka Gandhi pulled up the party workers for failing to work for the Congress during the polls.

"I will find out the names of the workers who did not work for the party in the election," she had said, adding that those who had toiled honestly and sincerely for the party knew that from the core of their hearts.

"But those who did not, I will find out their names," she had said.

Priyanka Gandhi, who was appointed as the party general secretary just ahead of the parliamentary polls, had campaigned vigorously for Congress candidates in Uttar Pradesh, especially in Raebareli and Amethi.

But of the 80 Lok Sabha seats in the state, the Congress could manage to win only Raebareli. Even party president Rahul Gandhi lost to Union minister Smriti Irani from his family stronghold of Amethi.

Bypolls are due for 11 Assembly seats in Uttar Pradesh after the respective MLAs were elected to Parliament.