Salman Khan blackbuck poaching case: The prosecution hinged the case on the post-mortem report which said that the blackbucks had gunshot wounds.

Salman Khan was found guilty in the blackbuck poaching case and was given five years in jail.

Jodhpur: Bollywood superstar Salman Khan walked out of the Jodhpur Central Jail Saturday evening, where he spent two nights after being convicted for killing two blackbucks 20 years ago. Judge Ravindra Kumar Joshi, who began hearing his bail request in the morning, ordered his release on bail. The actor has been directed to appear before the court on May 7.

Fans waiting outside cheered as Salman Khan emerged from the jail, wearing a black t-shirt and a cap, with his bodyguard Shera waiting to escort him.

Salman Khan directly went to the Jodhpur airport from jail, from where he took a chartered flight to Mumbai. He received a hero's welcome at the Mumbai airport and at his Bandra residence, with thousands of fans lined up to greet him.

In court on Saturday, Salman Khan's lawyers were asked to file a bail bond for Rs 50,000 and produce a Rs 25,000 surety from two persons each to guarantee that the actor will comply with all bail conditions. The bail documents were be sent to Jodhpur Central Jail around 5 pm and he was released in the next 30 minutes. But he can't leave the country without the court's permission, the judge emphasised.

The 52-year-old actor was sentenced to five years for killing two blackbucks in 1998 in Kankani village, near Jodhpur in Rajasthan, during the shooting of a multi-starrer, "Hum Saath Saath Hain".

His co-actors Saif Ali Khan, Tabu, Neelam Kothari and Sonal Bendre, who were in the SUV that the Dabangg actor was driving during their alleged late night hunting outing, were, however, acquitted by the Jodhpur sessions court.

In the hearing on Saturday, the prosecution talked about the credibility of the witnesses and hinged the case on the post-mortem report which said that the blackbucks had gunshot wounds. However, Salman's lawyers argued that only the bones of the animals were sent for evaluation when their skins, as crucial, weren't. They asked for bail on grounds that the witnesses against him weren't reliable. 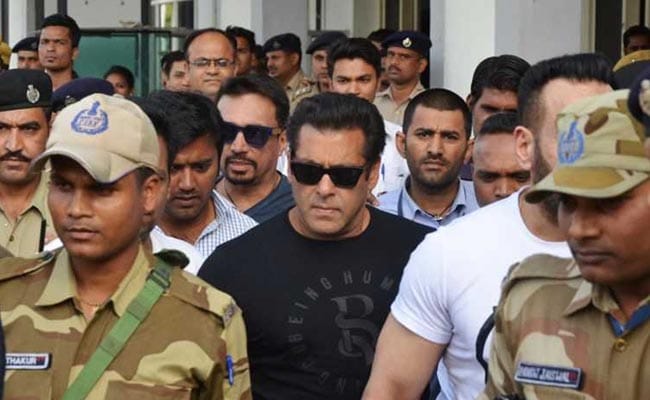 Judge Joshi, who is in the middle of the annual reshuffle of judges in Rajasthan, had, on Friday, put off the hearing by a day as he wanted to go through the entire case record before making a decision. He will be replaced by Chandra Kumar Songara, district and sessions judge of Bhilwara within the next week.

On Thursday, Judge Dev Kumar Khatri had convicted Salman Khan for poaching two endangered blackbucks in 1998. The case against him was brought by members of the Bishnoi community, who revere antelopes. The community has pursued the case for almost two decades and welcomed his conviction.

In the numerous hearings over the years, the actor and his counsels insisted that he was being framed. Reports that the animals died of "overeating" or that they were killed by dogs were also submitted in court to establish his innocence.

In an interview in 2009, Salman Khan had told NDTV that he had "saved the deer" and fed it biscuits. "We saw a fawn caught in a bush. He was petrified. I took him out of there, gave him some water. The whole herd was there. (The fawn) ate a few biscuits and went away".

The blackbuck, an endangered species, is protected under Schedule 1 of the Indian Wildlife Act and the punishment for hunting blackbuck can be up to six years. Salman Khan has also been accused of killing two chinkaras and a blackbuck in September 1998. In all, three cases of poaching and one under the Arms Act were registered against Salman Khan in 1998.

Promoted
Listen to the latest songs, only on JioSaavn.com
In July 2016, the Rajasthan High Court acquitted Salman Khan in the chinkara poaching cases. A year later, the Jodhpur court acquitted him in the Arms Case, where he was accused of possessing and using weapons with an expired licence during the hunt for the endangered chinkaras and blackbucks.