"Will Decide On BJP Alliance After Meeting With Amit Shah": OP Rajbhar 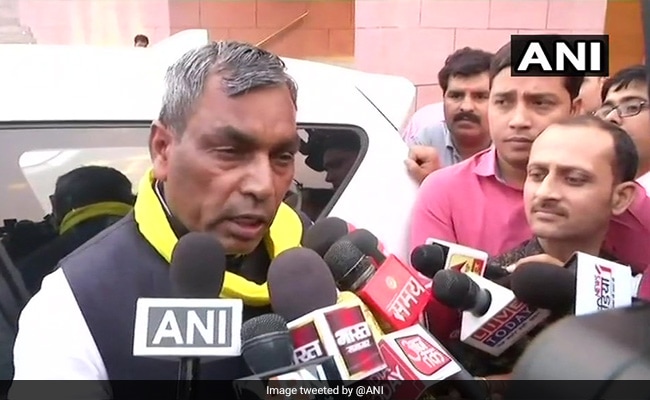 Mr Rajbhar, who earlier threatened to part ways with the BJP if recommendations of the Social Justice Committee were not implemented by February 24, said a meeting has been scheduled with the BJP president in Delhi on Tuesday.

"After the meeting, it will be decided whether we have to contest the coming elections in alliance with the BJP," he said.

Asked if Chief Minister Yogi Adityanath will also attend tomorrow's meeting, Mr Rajbhar, whose Suheldev Bharatiya Samaj Party (SBSP) is an ally of the BJP in Uttar Pradesh, said, "His presence is not important as the decision has to be taken by the BJP."

On the issues concerning the meeting, he said that besides the implementation of the recommendations of the Social Justice Committee, matter of allotment of office for his party in Lucknow among other issues will also be taken up.

To another question, he said how sincere the BJP is in giving shape to the promises made to him by it was more important than how many seats are given to his party in the coming polls.

Mr Rajbhar had recently accused the BJP of creating confusion and not fulfilling his party''s demands, saying the option for his outfit to join the SP-BSP alliance in the state for the upcoming general elections is open.

He had then said he was in talks with TMC supremo Mamata Banerjee, Shiv Sena chief Uddhav Thackrey, RJD leader Tejashwi Yadav, SP president Akhilesh Yadav and BSP chief Mayawati, and a decision on retaining or severing ties with the saffron party would be taken after February 24.

Mr Rajbhar had written to UP Chief Minister Adityanath to give up the charge of the backward class welfare department, expressing disappointment that his recommendations on appointment of state backward castes panel members have been "ignored".

In the 2017 Uttar Pradesh Assembly elections, the BJP had bagged 312 out of 403 seats, while the SBSP had won 4 seats. Another ally in the combine, the Apna Dal (Sonelal), had won nine seats.

Arun Rajbhar, general secretary of the SBSP had earlier said, "If the BJP does not agree to the demands raised by us, we will definitely part ways with them. If the saffron party does not implement the recommendations of the Social Justice Committee by February 24, then our path would be separate, and subsequently, we will contest all 80 Lok Sabha seats in the state."

Hitting out at the BJP, Arun Rajbhar had said, "It is the last warning, and after February 24, there will be no agreement with the BJP."