Motilal Vora, the senior-most Congress general secretary, is supposed to perform routine duties of the president if the party chief resigns. 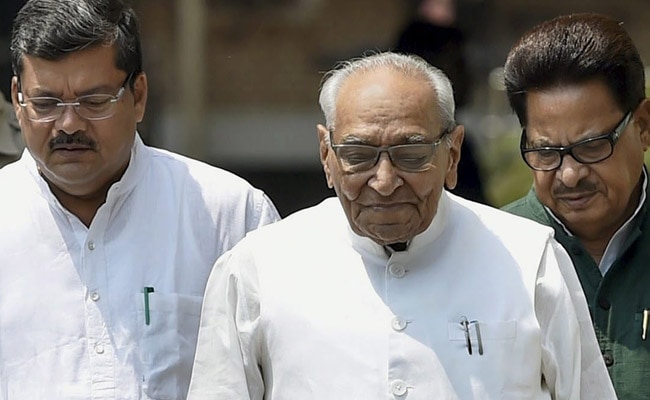 Motilal Vora ruled out that he was taking over after Congress chief Rahul Gandhi.

According to the Congress constitution, Mr Vora, the senior-most general secretary, is supposed to chair meetings and perform the routine duties of the president if the party chief resigns. However, the 90-year-old leader ruled out that he was taking over.

"I have no information regarding me being made the interim president of the party," Mr Vora told news agency ANI.

Rahul Gandhi, the 49-year-old leader of opposition Congress party, said on Wednesday he had asked party bosses to find a successor after he took responsibility for losing a general election that has left the party in crisis.

Mr Gandhi, the fourth generation leader of the Nehru-Gandhi family, released a public letter to colleagues in which he appeared determined to relinquish his family's control over the 133-year old party and called for its radical transformation.

"Rebuilding the party requires hard decisions and numerous people will have to be made accountable for the failure of 2019... It would be unjust to hold others accountable but ignore my own responsibility as President of the party," he wrote.

Congress suffered a mauling for a second general election in a row from Prime Minister Narendra Modi's BJP. Mr Gandhi himself lost the traditional family seat in Uttar Pradesh.

He announced his decision to quit as Congress leader in May, but the party leadership refused to accept it. They pressed him to reconsider, saying the party needs a unifying figure from the family to avoid splintering.

Gandhi has said the party's decision-making Congress Working Committee (CWC) should launch a search for a new party president in which he would not play a role. The Congress may choose between senior leaders Sushil Kumar Shinde and Mallikarjun Kharge as new party president, sources said.

For most of nearly 70 years, Congress has been controlled by a member of the family, beginning with India's first prime minister Jawaharlal Nehru.