What Kashmir interlocutors have recommended to govt 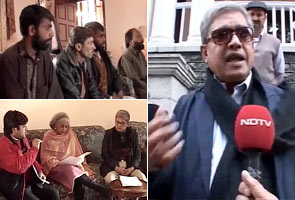 New Delhi: The interlocutors appointed by the Centre a year ago to design a political roadmap for Jammu and Kashmir, have submitted their report to the Home Minister today.

Journalist Dileep Padgaonkar, academician Radha Kumar and former Information Commissioner MM Ansari have not indicated whether they are in favour of more autonomy for Kashmir; references to "azadi," the complex issue of self-determination raised and interpreted differently by various groups, are  not mentioned in the report. But the interlocutors have emphasized the need to reduce the Army's visibility and address human rights violations urgently.

The trio has also suggested that the government consider reviewing the Armed Forces Special Powers Act (AFSPA), which many allege endows the Army with sweeping powers without corresponding accountability. The interlocutors say the Distrubed Areas Act should be lifted - that means those areas categorised as "disturbed" would automatically be exempt from AFSPA.

The interlocutors travelled over the last 12 months to all 22 districts of the state and met with nearly 700 delegations to gauge possible solutions to the Kashmir crisis. The separatists refused to meet them.

The government appointed the interlocutors a year ago after a summer of enormous unrest in the Valley. 120 people were killed in clashes between security forces and stone-pelters, most of them young men. The interlocutors suggest that the government focus on creating more jobs.

Promoted
Listen to the latest songs, only on JioSaavn.com
In October, a controversy erupted around Mr Padgaonkar's suggestion that a workable solution for Kashmir could not be managed without Pakistan's involvement. The BJP took fierce exception to this and accused the interlocutors of "exceeding their brief."