What Jayalalithaa said to Hillary Clinton 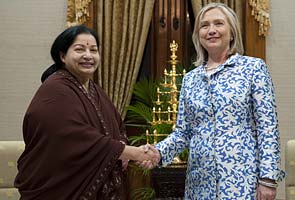 Chennai: US Secretary of State Hillary Clinton today voiced concern over the plight of Internally Displaced Persons in Sri Lanka and said her country was looking at some innovative and creative ideas to break the impasse over the Sri Lankan Tamils issue.

Hillary, who called on Tamil Nadu Chief Minister Jayalalithaa at the secretariat in Chennai, told her that US was looking at some innovative and creative ideas to break the impasse and enable Sri Lankan Tamils in camps get back to their own homes.

Jayalalithaa said though the war between the Sri Lankan army and LTTE in the island nation was over two years ago,  Sri Lankan Tamils in Jaffna area are still in camps and unable to go back to the original areas where they used to live.

While discussing the issue of Sri Lankan refugees in Tamil Nadu, Jayalalithaa told Hillary they have been provided all facilities that were available to local citizens.

Both of them discussed various social, political and economic issues of common interest, an official press release said.

The US Secretary of State also congratulated Jayalalithaa on her electoral victory in the April 13 assembly polls.

During the meeting, Jayalalithaa recalled the strong bilateral trade relations between India and United States.

Inviting more US investment in the Automobile sector in Tamil Nadu, she said Tamil Nadu enjoyed pre-eminence in automotive and auto components.

Jayalalithaa also expressed concern over reduction in issue of H1B visas even though in terms of number of Visas issued, the Chennai US Consulate was the second largest in the world.

Hillary invited Jayalalithaa to visit US which would enable Americans to know about the great achievements of Tamil Nadu.

Promoted
Listen to the latest songs, only on JioSaavn.com
The meeting lasted for an hour.