Bengal Polls 2021: PM Modi said the West Bengal chief minister's insensitivity was evident once again in connection with the Cooch Behar firing incident, while referring to an audio tape that went viral on Friday. 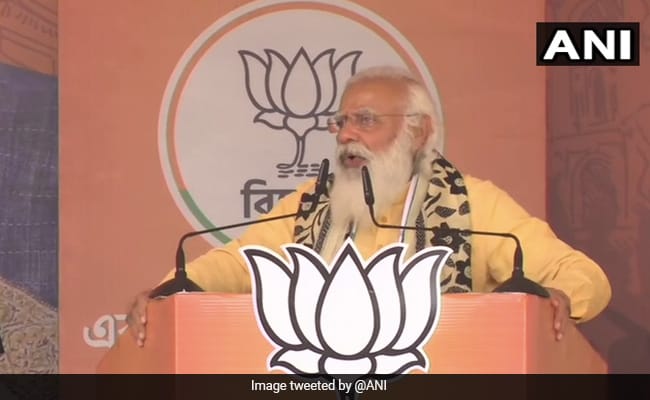 Prime Minister Narendra Modi on Saturday claimed that the Trinamool Congress has been broken in the first four phases of elections, and asserted that Chief Minister Mamata Banerjee and her nephew would be vanquished by the end of polling in the state.

Speaking at an election rally, in the sprawling industrial town of Asansol, PM Modi also claimed the Trinamool Congress supremo has an old habit of doing politics with dead bodies and has been trying to politicise the "unfortunate" death of five people at Sitalkuchi in Cooch Behar district on April 10.

"After four phases, TMC will be broken to pieces and Didi, bhatija will be vanquished after eight phases of elections (are completed)," PM Modi said.

Polling is scheduled in the industrial town in the seventh phase on April 26.

Ms Banerjee and her nephew Abhishek Banerjee have been spearheading the Trinamool's campaign in the assembly elections in West Bengal for a third consecutive term for their party.

Holding that illegal coal mining has flourished in places around Asansol in West Bardhaman district, the prime minister said everyone knows where the proceeds of this trade went.

PM Modi said the West Bengal chief minister's insensitivity was evident once again in connection with the Cooch Behar firing incident, while referring to an audio tape that went viral on Friday.

Ms Banerjee allegedly asked her district party leader to take out a rally.

"The truth is that Didi thought of her own political gain from the death of people in Cooch Behar. She has an old habit of doing politics with dead bodies," he alleged.

Contending that Ms Banerjee has not been attending most of the meetings between the prime minister and state chief ministers on one pretext or another, PM Modi said that she has also not attended two recent meetings over the emerging Covid situation in the country.

The prime minister went on to claim his rival has stood as a wall between West Bengal's people and central welfare schemes, depriving them of benefits, including from the PM-Kisan and Ayushman Bharat schemes.