Jagdeep Dhankhar met Amit Shah at the latter's office at the Parliament complex, an official said. 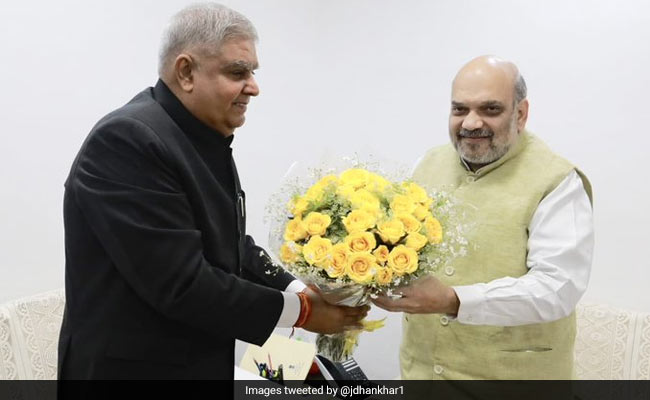 West Bengal Governor Jagdeep Dhankhar on Friday met Union Home Minister Amit Shah and apprised him of various issues of "serious concern touching upon the governance" in the state.

Mr Dhankhar met Mr Shah at the latter's office at the Parliament complex, an official said.

The meeting was held at the initiative of the governor, who was appointed to the Constitutional post over seven months ago.

"I have availed this opportunity to apprise the Union home minister of various issues of serious concern touching upon the governance in the state. I discussed with him a variety of issues," Mr Dhankar told reporters here.

This was his first meeting with Mr Shah after assuming charge as governor.

It comes within a week of Mr Shah's visit to Kolkata. At a rally in the city, the Union minister had expressed "anguish" over the law and order situation in West Bengal.

Mr Dhankhar has been engaged in bitter acrimony with the West Bengal government over a host of issues since assuming charge in July last year.