West Bengal Elections From March 27 In 8 Phases, Longest Ever

West Bengal election dates: The state is geared up for a closely-watched contest between a surging BJP and the state's ruling Trinamool Congress.

West Bengal election dates were announced by the Election Commission on Friday.

West Bengal elections will be held in eight phases from March 27 to April 29, the Election Commission announced on Friday, making it the longest ever polls in the state, seemingly over concerns of violence voiced the loudest by the BJP. The results will be declared on May 2.

The Election Commission declined to say whether the voting had been stretched out over concerns raised by the BJP, which rules at the centre but suggested that security played a role in the consideration.

"We avoid taking names of political parties. We had an assessment of law and order on several factors. Last time it was seven phases so eight is not a big deal," outgoing Chief Election Commissioner Sunil Arora said.

West Bengal Chief Minister Mamata Banerjee questioned the move. "Bihar has 240 seats and had elections in three phases. Tamil Nadu has 234 seats and will have election in one day. Why eight phases here? Who is benefitting?" she said.

"This is as per BJP requisition. My question to the Election Commission is, tell me why half a district will elections on one day and the other half on another day? Because we are strong in South 24 Parganas, they are holding elections in three phases," Ms Banerjee said. 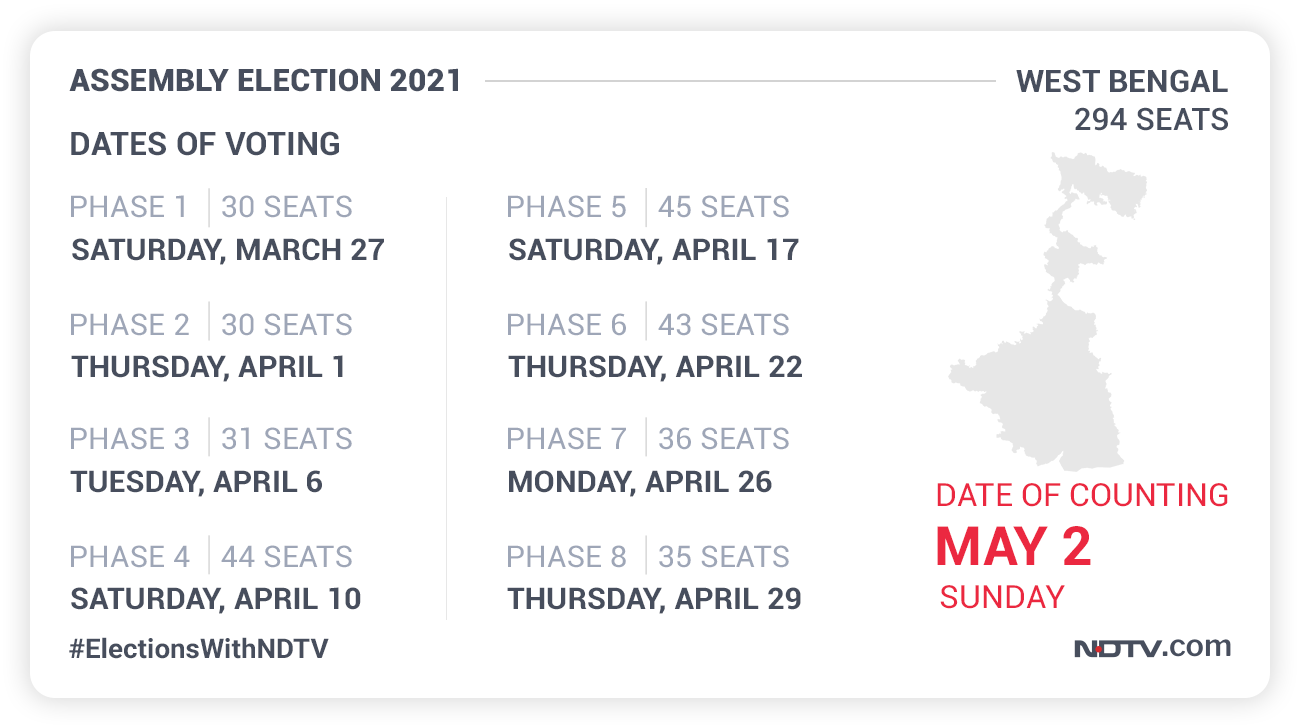 "Has this been done at the instance of Narendra Modi and Amit Shah? Why give them 23 days here? We will defeat you still. We are grassroots people. The daughter of Bengal has one thing to say, I know Bengal very well. I will defeat all your conspiracies. People of Bengal will respond to this insult," she said.

Kailash Vijayvargiya, the BJP's Bengal in-charge, said, "All parties had wanted he elections to be stretched out this time so that central forces can have enough time to plan their deployment. I also appeal to the Election Commission to depute additional officers apart from security forces to enable fair elections."

Chief Election Commissioner Sunil Arora in his news conference said the election body will be sending two observers to keep an eye on police operations and a third one can be sent if needed.

With the announcement of dates, the model code of conduct will come into effect, Mr Arora said, meaning the state government cannot announce populist measures.

West Bengal is geared up for a closely-watched contest between a surging BJP and the state's ruling Trinamool Congress.

The BJP has pulled out all the stops, with Prime Minister Narendra Modi, Home Minister Amit Shah and others holding frequent rallies, to unseat Chief Minister Mamata Banerjee.

While the BJP has gathered remarkable momentum in the run-up, investing money, time, and energy, the Trinamool has strived to dub it an "outsider" party that doesn't understand West Bengal. The poll campaign, till now, has been largely vitriolic.