Monsoon news and updates: Widespread rainfall is expected over the next two days in the Konkan coast, Goa and Gujarat, the weather office said. 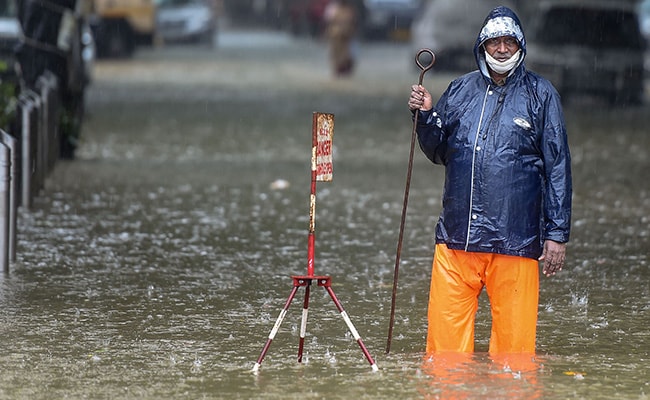 Mumbai rain: A city civic worker stands near a manhole to alert people near Parel

Heavy rain lashed Mumbai and its neighbouring areas today, the India Meteorological Department (IMD) said. Widespread rainfall is also expected over the next two days in the Konkan coast, Goa and Gujarat, according to the weather office.

The Santacruz weather station in Mumbai reported 191 mm rainfall in the last 24-hours ending at 8.30 am today, while Colaba recorded 156 mm in the same time period. Other places in Maharashtra like Ratnagiri, Nanded and Osmanabad in the Marathwada region also received heavy rainfall.

Here is a look at the all-India weather forecast today.

Heavy rain has been predicted in the eastern part of the country as well. "Isolated extremely heavy rainfall is very likely over sub-Himalayan West Bengal, Sikkim, Arunachal Pradesh, and Assam and Meghalaya on July 20, the Met office tweeted.

While there has been let up in the rain for past two days in Assam and flood waters have started receding in some areas, the over all situation in the state remains grim. Over 36 lakh people have been affected the number of deaths have gone up to 68.

Assam Chief Minister Sarbananda Sonowal on Thursday visited a flood relief camp near Kaziranga. "Floods in Assam have brought new challenges to us at a critical period and we are leaving no stone unturned in safeguarding the lives of both people...,"Mr Sonowal said.

This morning, visited & interacted with inhabitants of a flood relief camp at Rising Sun School, Kohora near Kaziranga. #AssamFloods has brought new challenges to us in a critical period & we are leaving no stone unturned in safeguarding the lives of both people and animals. pic.twitter.com/TpyohbixJx

Assessed the situation in #KazirangaNationalPark as vast areas of the world heritage site are currently submerged in flood water. Forest officials, with assistance of civil admin, police and other agencies, providing adequate food and veterinary services to the affected animals. pic.twitter.com/G2fmzeXMqd

Over 80 per cent of the Kaziranga National Park has been inundated and four rhinos have died in the last two days, according to the forest officials. Over 75 animals in the national park have died so far.