The Indian Coast guard interceptor boat, C-404, rescued the crew from the sinking boat at around 3 AM today, Navy said. 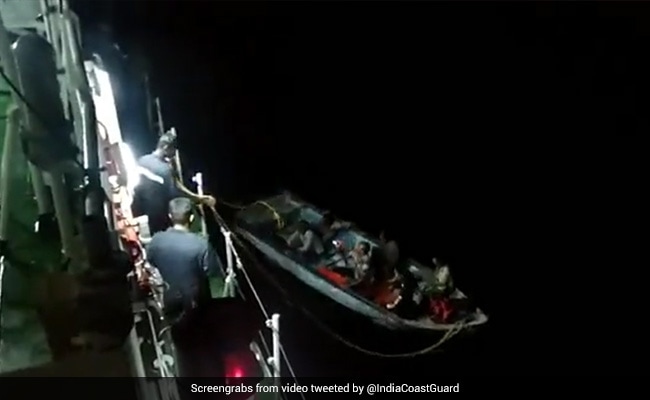 Navy said the vessel that sank was enroute to Androth in Lakshadweep.

Coast guard interceptor boat, C-404, rescued the crew from the sinking boat at around 3 AM today, Navy said.

Navy said the vessel was enroute to Androth in Lakshadweep with livestock, construction materials etc.

"Maritime Rescue Sub-centre, Beypore, telephonically contacted crew of distressed MSV and ascertained that MSV was under voyage from Beypore to Androth loaded with Construction Materials, Livestocks, Cows etc. The vessel was sunk... due to flooding in the engine room. All the crew jumped to the lifeboat and were drifting in the open sea," Navy said in a release.

Navy said the C-404 reached position at around 4.20 AM and rescued all crew members.

"All crew were taken onboard and first aid rendered. All crew reported to be in healthy condition," it said.

C-404 took the lifeboat under tow, and reached Beypore harbour at 6:15 AM and the crew were handed over to the local authorities.