The video shows the sprawling pink cake, sprinkled with red cherries and abundant amount of icing, spanning across several tables. 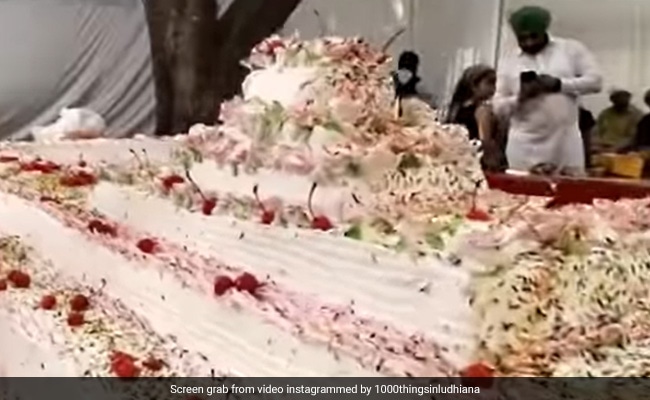 For the Sikh community, Gurpurab is the most significant festival, celebrated to mark the birth of their first teacher, Guru Nanak. Sikh devotees celebrate the festival with much pomp and grandeur to honour Guru Nanak's teachings and legacy. On the pious occasion, a gurdwara in Chandigarh baked a jumbo 553-kg cake to mark the 553rd Prakash Parv.

An Instagram page called 1000 Things in Ludhiana shared the video of the gigantic cake and captioned it as, "553 kg cake prepared & distributed among people as langar on Guru Nanak Jayanti at a Gurdwara Sahib near sector 19, Chandigarh. Waheguru Ji.''

The video shows the sprawling pink cake, sprinkled with red cherries and abundant amount of icing, spanning across several tables from one end to another. A crowd of people are seen gathered around the delicious dessert, perhaps waiting to relish it. As the caption suggests, the cake was distributed among the people as langar. In Sikhism, a langar is the community kitchen of a gurdwara, which serves meals to all free of charge, regardless of religion.

The Sikh guru was born on April 15, 1469, in Rai-Bhoi-di Talwandi in the present Pakistan to Kalayan Das Mehta and Matta Tripat. Guru Nanak Dev did not believe in superficial aspects of religion and asserted that he would wear God's name in his heart. Celebrations for Guru Nanak Jayanti include decorating houses with lights, exchanging greetings, and paying visits to Gurudwara.

A PTI report said that 2,420 Indian Sikh pilgrims travelled to Pakistan to participate in the Guru Nanak Jayanti celebrations in different prominent religious sites, citing data from the Union Home Ministry. Besides, a total of 433 pilgrims from India visited Sri Kartarpur Sahib Gurdwara in Pakistan through ICP Dera Baba Nanak, Amritsar on Tuesday to offer prayers on the occasion of Gurupurab, a home ministry statement said.