Snowfall and hailstorm blocked roads in several parts of Himachal Pradesh including Shimla. An avalanche blocked a highway in Kinnaur 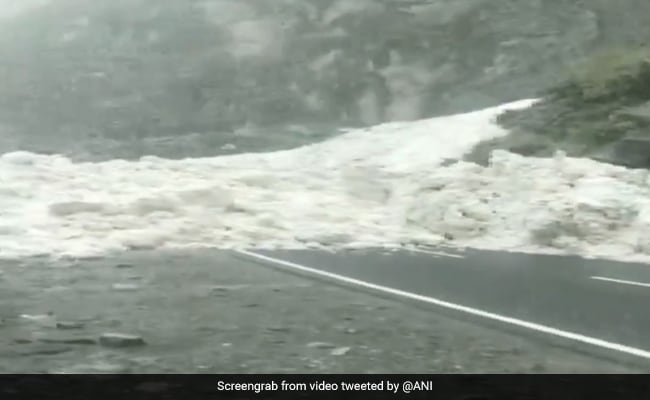 Hailstorm, rain and snowfall in Shimla and parts of Himachal Pradesh caused landslides, blocked roads and damaged crops and property. According to officials, an avalanche in Kinnaur blocked the national highway and rockslides caused massive damage to property and killed livestock. Shimla received 83 mm rainfall in the last 24 hours, the second-highest rainfall in a day during the month of April, senior officer of the meteorological centre, Manmohan Singh said, adding that the highest  single-day rainfall in April occurred last in 1979. According to the latest weather forecast, thunderstorms are likely to continue at many places in Himachal Pradesh on Friday.

#WATCH | Himachal Pradesh: NH5 in Rali area of Kinnaur district blocked due to an avalanche. pic.twitter.com/mGODqlf3iB

Roads in Shimla turned slippery conditions after the hailstorm. Kangra district received 33 mm rain, while Dalhousie and Keylong recorded 27 and 26 mm rainfall. Besides, several areas in the high reaches of Himachal Pradesh witnessed snowfall, especially the Lahaul valley and the Manali-Leh highway was once again blocked at the Baralacha Pass. Power supply was also disrupted in parts of Lahaul-Spiti.

Landslides also blocked roads in Solan, and several villages were cut-off after a bridge on the Ashwani Khad was washed away.

Chandigarh in the plains also received rainfall. There is rainfall forecast in Delhi as well. According to the meteorological department, thunder