"Was Stuck In Debris As Roof Collapsed": Survivors Recount UP Dust Storm

The state governments claim that they aim to restore the situation back to normal.

Agra: Over 100 people died in the thunderstorm that hit parts of Uttar Pradesh and Rajasthan on Wednesday. The worst-hit areas were villages around Agra where 48 people died and Bharatpur which reported 19 deaths. In these areas, the aftermath of the storm is glaring.

40-year-old Laado lost everything she owned, during the storm that ravaged Bharatpur in Rajasthan, killing 19 and injuring 138. Her thatched house caught fire from the stove and everything was reduced to ashes. She says there was no warning from the administration about the storm. "All my belongings... my earning of Rs 5,000 got engulfed in the fire and so did my Aadhaar card and insurance papers. The administration has not given any relief material. We never got any prior warning," said Laado.

Ramesh Singh who is now lying in the Bharatpur government district hospital with a fractured arm and leg recalls the terrifying moments when the storm struck with wind speeds of 125 kmph. 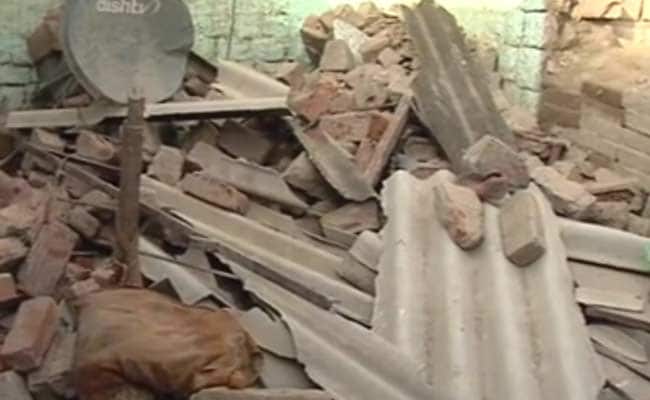 After the storm, uprooted trees and electricity poles are a common sight in Rajasthan, UP

Ramesh Singh said, "I went to the terrace of my house to collect grains. The roof collapsed and I got stuck in the debris. My brother pulled me out. I have suffered a fracture in the arm and in my leg."

10 kilometres away, in Gamdi village, the destruction has been widespread. Uprooted trees and electricity poles are a common sight.

Five tehsils of Bharatpur have had no electricity for three days. The Rajasthan electricity department has suffered losses worth an estimated Rs 50 crore.

In Agra's Kheragarh tehsil, 25 people died in the storm. Among them were two brothers - five-year-old Dev and 10-year-old Vivek as the roof of their room collapsed on them.

Promoted
Listen to the latest songs, only on JioSaavn.com
The grandfather of the children, 62-year-old Dataram told NDTV, "I was in Agra and got a call that both the children died after the roof collapsed. My daughter-in-law, who was also in the room, also suffered injuries and is admitted to a hospital."

The state governments claim that they aim to restore the situation back to normal at the earliest but the scale of this tragedy and the loss of these families will take a long time to heal.