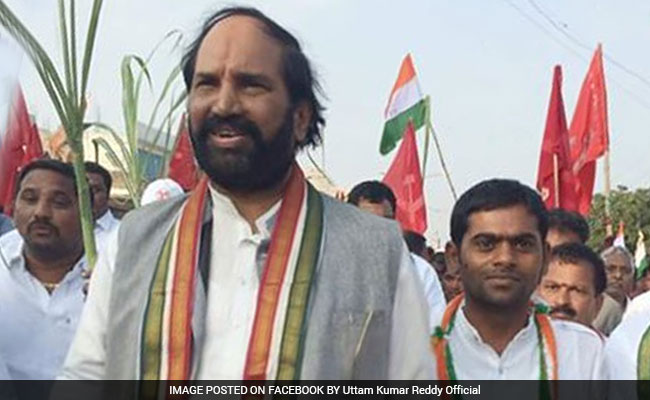 Voters who backed the YSR Congress and Telugu Desam party in the 2014 elections are likely to be the deciding factor in Huzurnagar constituency, from where Telangana Congress chief Uttam Kumar Reddy is seeking re-election.

YSR Congress, which has chosen not to contest the December seven Telangana Assembly election, and TDP candidates polled more than 25,000 votes each in this segment in the previous poll.

TDP chief and Andhra Pradesh Chief Minister N Chandrababu Naidu is a partner in the Congress-led alliance along with CPI and TJS, named "Praja Kutami" (People's Front), for the upcoming Telangana election giving a boost to Mr Reddy's electoral prospects.

But, at the same time, YSR Congress leaders said the supporters of their party would not support Mr Reddy as the Congress has allied with TDP, its arch-rival in neighbouring Andhra Pradesh, and their votes would go to the TRS.

Mr Reddy, a former pilot in Indian Air Force, is betting on the "anti-incumbency factor" and the support of the alliance partners while his opponent Saidi Reddy (TRS), an NRI and IT professional, is counting on beneficiaries of various government schemes in the constituency.

"Our cadre and YSRC sympathisers would never vote for Congress as it tied up with TDP which is our arch-rival in Andhra Pradesh. So we would vote for the TRS candidate. And as such voters of this constituency lost faith in sitting MLA Uttam Kumar Reddy as many housing projects which were initiated when he was the Housing Minister (in undivided Andhra Pradesh) either did not take off or bills have not been paid for beneficiaries," Srikanth Reddy told news agency PTI.

The Congress is also wooing Ms Shankaramma who was denied ticket this time by TRS by expressing sympathy that she was neglected by her party. Her son Srikantha Chary self-immolated during the agitation for separate statehood for Telangana.

"Entire Telangana remembered the treatment (by denying ticket this time) meted out to Sankaramma by TRS leadership. Congress party would suitably accommodate her in future. As a candidate of People's Front, I am going win with 60,000 to 70000 majority from this constituency. We hope people of Huzurnagar will bless us with the highest majority. As we do not have children, me and my wife always treat the people of this constituency as our family members and children," the TPCC chief had said at the time of filing his nomination.

Mr Reddy is seeking re-election for the fifth time. In 1999 and 2004 he contested from Kodad while in 2009 and 2014 he was elected from Huzurnagar. His wife Pamdavathi who represented Kodad in 2014 is contesting again.

Independent political analyst Telakapalli Ravi said majority of the "committed" TDP voters may vote for Uttam Kumar Reddy as they are strongly opposed to TRS.

"The very idea of Congress and the TDP sailing together, leaving the decades-old difference, is to defeat the TRS. There is a chunk of committed voters of TDP in Telangana. They may vote for Congress candidates," Mr Ravi says.

Saidi Reddy said there are over 90,000 beneficiaries under various government programmes such as pension scheme and 'Rythu Bandhu.'

"They (the beneficiaries) would certainly vote for me. Also people see Congress as an opportunist as it is going along with TDP which is considered as a party with anti-Telangana stance. There is notion in the voters of this constituency that Uttam Kumar Reddy is not accessible to common people," Saidi Reddy said.

Saidi Reddy worked in Jamaica and Canada over the last decade and returned in 2015.

Since then, he has been nurturing Huzurnagar constituency.