The move of deploying teachers as volunteers at liquor shops has drawn flak from various quarters. 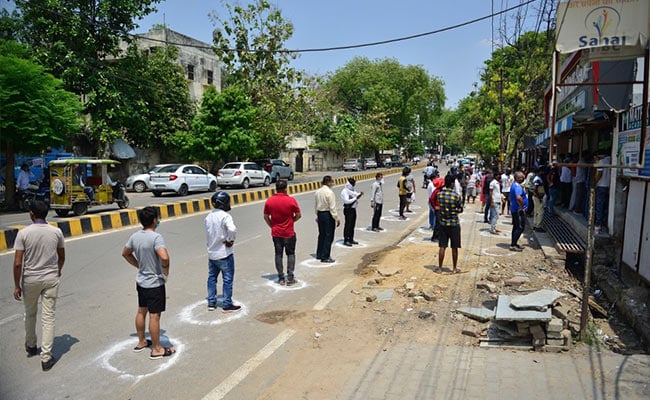 Governent school teachers in Vishakhapatnam were brought in to control the massive crowd of tipplers, pushing and shoving each other outside liquor shops, as centre allowed alcohol shops to reopen.

Along with a handful of policemen, volunteers were deployed to regulate the chaotic queues outside liquor shops in the coastal city, which has reported at least 35 COVID-19 cases.

The move of deploying teachers as volunteers at liquor shops has drawn flak from various quarters.

Assistant Commissioner of the Excise Department, Bhaskar Rao told ANI over the phone: "Out of a total 311 alcohol shops in the district, 272 shops are functioning in the district. Due to heavy crowd, government teachers were deployed at wine shops to manage the crowd. The teachers distributed tokens to those who lined up to buy alocohol. Buyers then approach the shops when their numbers comes."

In Visakhapatnam district's Anakapalli town, two teachers said they were tasked to regulate the queues and see that social distancing is maintained among buyers.

Lakshmi Narayana, one of the teachers said, "I am a teacher at Buchaiahpet mandal. This is Mahesh, teacher from Anakapalle mandal. We are paired up and put on duty at this wine shop. Two teachers have been deployed at every wine shop. See, the profession of a teacher means service. We are ready to provide service anywhere. But we are feeling guilty to do our duty at wine shops. All teachers are condemning this. We are ready to do any service that government needs. But we request not to be placed at wine shops."

The teacher added, "Our District Educational Officer (DEO) has asked us to report at the police station. The police allotted the place of duty. We are doing what we were asked to do. When the government asks, we have to oblige. But we request the government to use our services elsewhere."

Meanwhile, women held a protested outside a liquor shop in the city. One protester said: "Vegetable markets stay open for only 3 hours but liquor shops are allowed to remain open for 7 hours".

Andhra Pradesh on Tuesday hiked the prices of liquor by 50 per cent, a day after it imposed a 25 per cent hike, which takes the overall hike in liquor price in the state to 75 per cent. The revised rates came into effect from Tuesday. The hike has been imposed to discourage alcohol consumption, according to the chief minister YS Jagan Mohan Reddy's office.