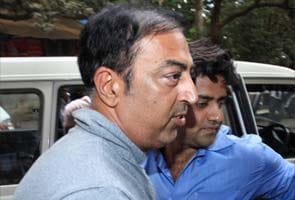 Mumbai: Actor Vindoo Dara Singh, son of late wrestler-actor Dara Singh, was arrested by the Mumbai Police today for his alleged links with bookies accused of spot-fixing in the Indian Premier League or IPL's on-going season.

Charged with cheating and forgery, the 49-year-old actor was produced before a local court in Mumbai, which remanded him to police custody till Friday.

The Mumbai Police says Vindoo's custodial interrogation was needed to establish the chain of people involved in the racket as the actor was not only betting himself but was also aiding the bookies. "We also want to find out if he was using his contacts with players to spot-fix IPL matches," the Mumbai Police's Crime Branch said in its remand application.

Police sources say the actor was named in the scam by Ramesh Vyas, one of the alleged bookies arrested by the Mumbai Police last week. Vyas reportedly told his interrogators that Vindoo was friends with several influential bookies and allegedly facilitated them. Mumbai Police had reportedly taped telephonic conversations as evidence against the actor.

The Mumbai Police's Crime Branch says Vindoo along with being in touch with bookies, was himself into betting too, according to PTI.

The actor has on many occasions been spotted watching IPL matches and attending post-match parties.

Promoted
Listen to the latest songs, only on JioSaavn.com
Vindoo has appeared in a few Bollywood films. He is also the Season 3 winner of reality TV show Bigg Boss. His arrest is the first Bollywood link busted after bookies and cricketers were arrested for 'spot-fixing' last week.

The Mumbai Police today also arrested Alpesh Kumar Patel, a hawala operator, and seized Rs 1.28 crore from him. Prem Taneja, a conduit for bookies who was said to be in close touch with Vindoo, was also arrested, Himanshu Roy, the Joint Commissioner of Police (Crime) told reporters in Mumbai.