The snake detects the presence of a human and spreads its hood to bite the boy. But the woman whisks him away just in the nick of time. 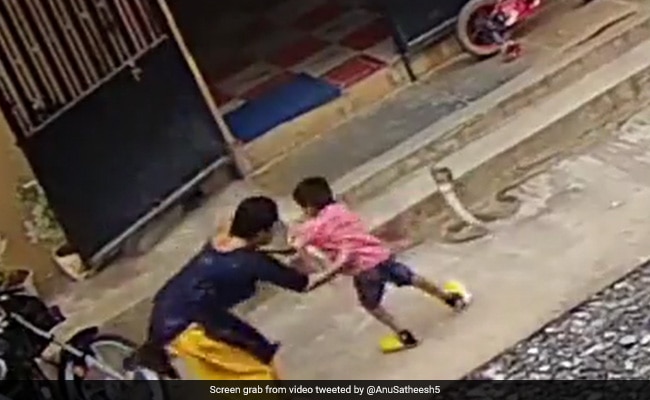 The woman immediately grabbed the boy and ran away from the spot.

A video going viral on social media shows a quick-thinking woman saving her son from a snake that was about to bite the boy. The footage has been captured by a CCTV installed in an area in Karnataka's Mandya, according to social media users who have posted it on various platforms. The woman was able to pull away her son just in the nick of time, before he could step on the snake. Everything happened in the blink of an eye.

As the video begins, the woman and her son are seen coming out of their house unaware that a snake is crossing the path. The serpent is very close to the step outside the house, which is why the boy misses it.

Her presence of mind saved the kid..
Mother ❤️
But be safe all, this is an eye opener to all pic.twitter.com/tPm6WbGc8g

The carefree boy crosses the step and that's when the snake, detecting the presence of a human, recoils and spreads its hood in self defence. The boy gets scared and tries to run back inside the house by jumping over the snake. That's when the woman, applying her presence of mind, grabs and pulls the boy away from the harm's way.

She holds him up on her shoulder and runs to safety. The snake too slithers away.

The woman's bravery is being lauded by Twitter users who look impressed by her quick reflexes.

"If there was a delay of even 1 second in pulling the boy, this cobra would have bitten him. My salute to mother's love," said a user.

"Really Miraculous Escape! It's Believed...GOD thought, HE cannot be with Everybody in this World. Hence, HE sent in MOTHER," tweeted another.

Some users claimed that the snake is a cobra.