Red alert warning has been issued for Bhopal and 38 other districts in Madhya Pradesh by the weather department. 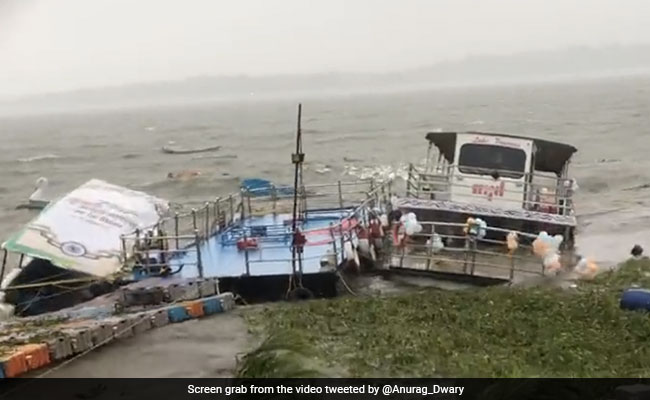 The cruise boat is seen in Bhopal's Upper Lake.

A video going viral on social media shows a partially submerged cruise boat in Upper Lake (now known as Bhojtal) in Bhopal, which has witnessed heavy rainfall in the past few days due to a deep depression over the region. The water level in the biggest lake of Madhya Pradesh capital has gone up after 4.5 inch rain since Sunday morning. All schools in Bhopal and Jabalpur have been shut down for day by respective district administration due to heavy rain. Apart from Bhopal, the India Meteorological Department (IMD) has issued a red alert for heavy rainfall in 38 districts, including Ujjain, Jabalpur, Ratlam, Neemuch and Mandsaur.

The video captured at the Upper Lake shows the empty cruise boat swinging violently due to sea-like waves triggered by high-speed winds. The rear of the boat appears damaged due to wave pounding, which caused water to gush in. The state capital has received 190 mm rain in last 24 hours.

The district administration has deployed rescue personnel to save the cruise boat, a major attraction among locals and visitors in Bhopal. It is run by MP State Tourism Development Corporation.

Uttar Pradesh Chief Minister Yogi Adityanath and his Chhattisgarh counterpart Bhupesh Baghel have cancelled their programme to physically attend the Central Zonal Council meeting in Bhopal due to bad weather.

Meanwhile, the IMD said on Monday morning that the deep depression over the central parts of Madhya Pradesh and adjoining south Uttar Pradesh has weakened into a depression.

The IMD said that the depression will continue to move west-north-westwards across north Madhya Pradesh and weaken into a well-marked low-pressure area during the next 24 hours.

Madhya Pradesh Chief Minister Shivraj Singh Chouhan also took stock of the situation and assured that his government was taking considerate attempts to cease or control the flow of water through the dams in the state.