Verdict On Future Of Kashmir Only By Kashmiri People: Sartaj Aziz 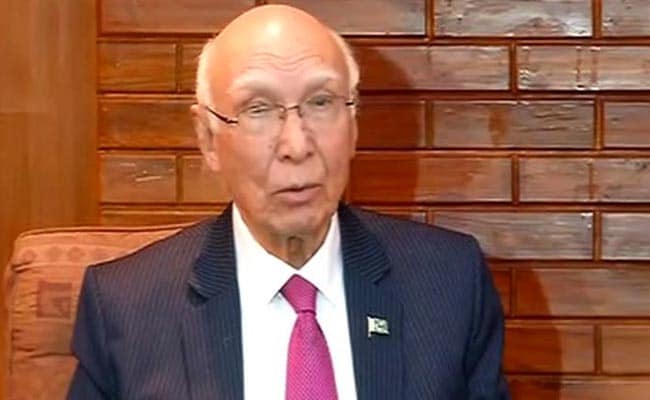 Islamabad: Amid a war of words, Pakistan today said any verdict on the future of Kashmir can only be given by the Kashmiri people, a day after New Delhi made it clear that the whole of Jammu and Kashmir belongs to India and will never become part of Pakistan.

"This right has been promised to the people of Kashmir by the UN Security Council. It is high time that India allowed the people of Jammu and Kashmir to exercise this right through a free and fair UN supervised plebiscite. Once the majority of the people of Kashmir have voted for joining either Pakistan or India the whole world will accept this verdict of the Kashmiri people," Mr Aziz said upping the ante on the issue.

Ms Swaraj had also objected to the statement of Prime Minister Nawaz Sharif in which he had called Burhan Wani a "martyr" saying "For India he was a wanted terrorist".

"Let us not forget, as one Indian writer has reminded us, that not long ago the British labelled Indian freedom fighters as traitors and terrorists because at that time India was considered an integral part of the British Empire," Mr Aziz said today.

"Government and the people of Pakistan remain firmly committed in their moral, diplomatic and political support to the Kashmiris' indigenous movement for self-determination and resolution of the Kashmir dispute in accordance with the relevant UN Security Council Resolutions on Kashmir," he said.