Varavara Rao is under house arrest till September 6

Varavara Rao at Hyderabad airport. He was taken home by the police

Varavara Rao, one of the five activists who were arrested, has been brought home in Hyderabad on Thursday.The Supreme Court had granted them reprieve yesterday, after hearing a petition challenging the arrests. The court said poet and Maoist ideologue Varavara Rao and activists Sudha Bharadwaj, Arun Fereira, Gautam Navlakha and Vernon Gonsalves, will be under house arrest till the next hearing on September 6. The top court has asked the Maharashtra government to file a response to the petition challenging the arrests.

"I am saying it from the beginning, that on basis of false statements, a case was filed against me. I have faith in the law," said Mr Rao after reaching home. Earlier at the airport Mr Rao told reporters, "If the fight against fascist policies is called a conspiracy, then there cannot be a bigger conspiracy than this (calling the fight a conspiracy)," said Mr Rao, adding that "The Supreme Court has ordered house arrest. As we have been saying, this is a false case against us. Bhima-Koregaon case should have been filed against the state and central governments."

"The Pune police brought him home at 7 in the morning. He was brought to the city by flight," Mr Rao's wife Hemalatha told news agency PTI, adding that the police is "not allowing anyone except his daughters and sons-in-law" into the house. When the news agency tried to talk to Mr Rao, his wife said the police have ordered him not to talk to the media. 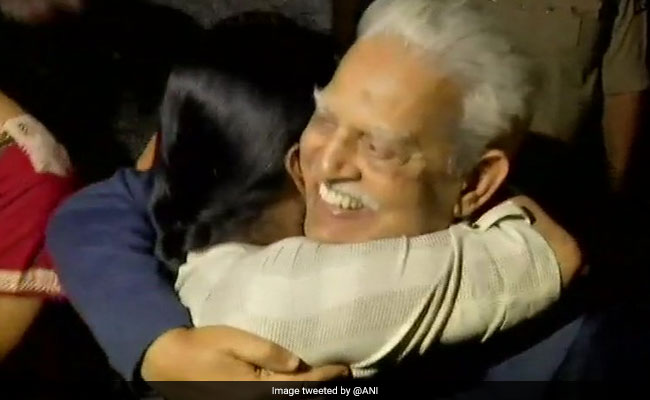 "They came at 6 am on Tuesday. They searched the entire house and seized the mobile phones. They took the papers and hard disks. They also searched my sister's house next door and another sister's house from 1.50 to 5.30 pm," Udaya told news agency ANI.

While Mr Rao, Vernon Gonsalves and Arun Fereira were sent back to Pune; lawyer, academician and trade unionist Sudha Bharadwaj is confined to her home in Faridabad and civil liberties activist Gautam Navlakhai to his residence in Delhi.

The Pune police had arrested the five activists in connection with a case lodged after the Elgar Parishad conclave held in Pune on December 31 last year, that had allegedly triggered violence at Bhima-Koregaon village.

During the arguments in the court, the public prosecutor claimed that the accused were planning to "wage a war" against the country and were involved in procuring arms and funding Maoist activities. The prosecutor said Mr Rao, Mr Gonsalves and Mr Ferreira were active members of the banned CPI (Maoists).

Submitting some letters to the court, the prosecutor claimed, Mr Rao was raising funds for the Maoists and was also involved in procuring arms. Another letter, as per the prosecutor, said that Maoists were facing heavy casualties. Along with Mr Rao, Surendra Gadling who was arrested in June allegedly pressed for inflicting heavy damage on the security forces as revenge. "The Elgar Parishad was organised to mobilise the Dalit community against the government," the public prosecutor told the court.

The arrest of prominent Left-wing activists was strongly condemned by several opposition leaders and people from different walks of life, with some of them terming it as a "manifestation of autocracy". The centre, in support of its stand on the issue, said in 2012, the Manmohan Singh government had identified organisations and had asked states to initiate action against them.

"The UPA government had identified 128 organisations with links to the CPI (Maoists) and written to all state governments asking them to take action against people involved with these organisations. Seven of them - Varavara Rao, Sudha Bharadwaj, Surendra Gadling, Rona Wilson, Arun Ferreira, Vernon Gonsalves and Mahesh Raut - belong to the organisations appearing in this list," a senior bureaucrat told NDTV.