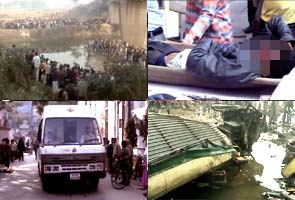 Lucknow: At least 12 people have been killed and many injured after a private bus carrying pilgrims fell into the Varuna river near Varanasi.

The bus carrying 24 passengers, who were on their way for the Sankranti holy dip, plunged into the Varuna river after hitting the railing along the river, District Collector Ravindra said.

She also announced free treatment for the injured in the mishap.

All the injured have been admitted to a hospital and the condition of four patients is reported to be critical.