Uttarakhand Chief Minister Pushkar Singh Dhami trekked up the steep slippery slopes of the village with a stick in hand for support to do an on-the-spot assessment of the losses. 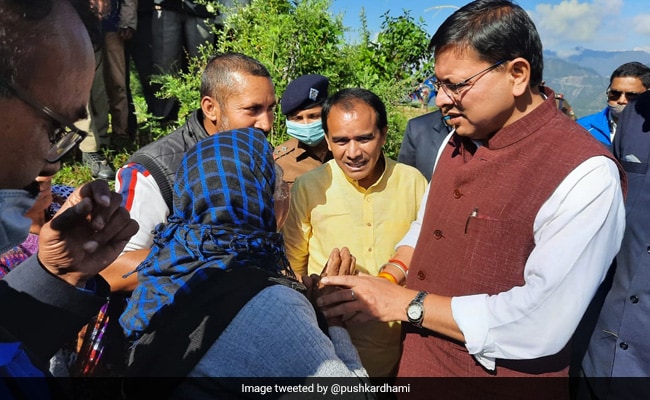 Pushkar Singh Dhami met surviving members of family and promised them all help from government.

Uttarakhand Chief Minister Pushkar Singh Dhami on Friday visited Dungri village in Chamoli district to meet the disaster-hit people who lost their kin in the landslides triggered by heavy rains in the state.

Accompanied by Tourism Minister Satpal Maharaj, State Disaster Management Minister Dhan Singh Rawat and officials, the Chief Minister trekked up the steep slippery slopes of the village with a stick in hand for support to do an on-the-spot assessment of the losses.

Two persons of a family were buried in the rubble of a landslide in the village on October 19. Mr Dhami met the surviving members of the family and promised them all help from the government.

He asked officials to speed up relief and rescue efforts in the affected areas assuring them that they will not have to face any shortage of resources.

"The affected families will get all support from the government. They have lost their kin and have little children. We will ensure that they are given good care," Mr Dhami told reporters during a visit to the village.

A total of 65 people were killed, 22 injured and two went missing during the recent spell of downpours in the hill state which also saw 60 houses being damaged.