In a move to promote tourism in the state, the Uttarakhand cabinet met aboard the 'Floating Marina'on the Tehri lake. 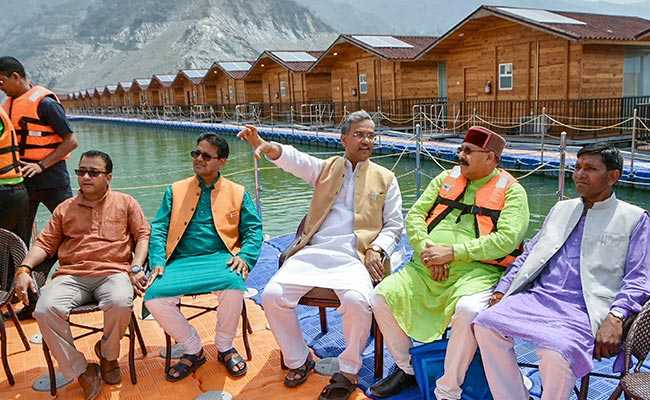 The 'Floating Marina'was specially spruced up for the cabinet meeting

New Tehri: The Uttarakhand Cabinet meeting on Wednesday had an unique twist - it was held aboard a floating restaurant on the picturesque Tehri lake. In a move to promote tourism in the state, the Uttarakhand ministers, led by Chief Minister Trivendra Singh Rawat, held their meeting and gave their nod to 12 decisions aboard the 'Floating Marina', a boat specially spruced up for the event, which served as a restaurant in the middle of the lake.

Chaired by the chief minister, a dozen major decisions were taken in the meeting with a focus on tourism and to put the state's natural resources to better use, State Urban Development Minister Madan Kaushik told the media.

They included a decision on allocating tourism the status of an industry and developing 13 new tourist destinations, one each in all 13 districts of the state under a scheme named '13 districts 13 destinations', he said.

The new destinations to be developed were Tehri lake, spread over an area of 42 sq km, the Surya temple at Katarmal in Almora , Mukteshwar Dham in Nainital, Satpuli and Khairasain in Pauri, Gairsain and Bhararisain in Chamoli, Lakhmandal in Dehradun district as Mahabharat circuit.

The other destinations to be developed were Pavan Bhoomi Shaktipeeth in Haridwar, Mori Har Doon in Uttarkashi, Chirbatiya in Rudraprayag, Gularbhoj in Udhamsingh Nagar district Devidhura in Champavat, Garun valley in Bageshwar and Mostmano in Pithoragarh, he said.

The Cabinet also approved a revised policy on the commercial use of dry pine leaves connecting it directly with employment, electricity and bio-fuel generation.

Dry pine leaves, considered a major cause of forest fire in Uttarakhand, would also generate employment opportunities at the local level, Kaushik said, adding that it would also reduce frequency of forest fires which cause great damage to wildlife and forest wealth.

The meeting came ahead of the Tehri Mahotsav to be held around the lake later this month. 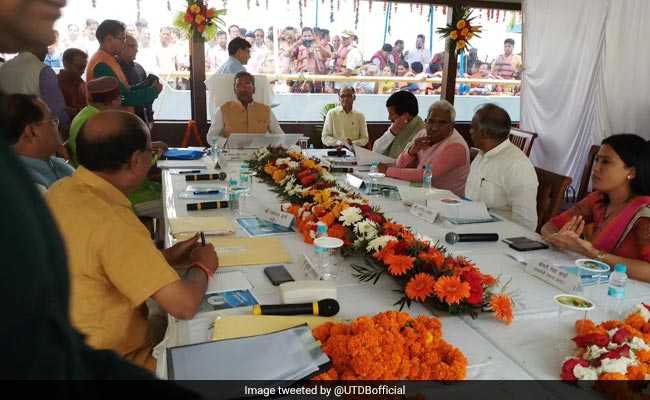 Earlier, accompanied by the tourism minister, the chief minister also reviewed preparations for the event and spoke of his plans to promote Tehri lake as an international tourist destination.

The Tehri Lake festival would also be publicized among foreign tourists, he said, and asked officials to make arrangements to record the experiences of tourists besides taking feedback from them.

The chief minister conducted an inspection at the lake for about 30 minutes in a boat and instructed the Tourism Department that the lake and the surrounding areas be kept on top priority schemes.

On this occasion, Tehri District Magistrate Sonika said the festival would be organised from May 25 to 27 and many programmes would be held, including cultural programmes, adventure sports and yoga.

The festival's main attraction would be the floating huts on the lake and their bookings were being done by the Garhwal Mandal Vikas Nigam.

The district magistrate said a dialogue had been initiated with tour operators, asking them to include the festival in their packages.

The chief minister later told reporters that the state government was eyeing tourism in a big way for generating employment in Uttarakhand.

Promoted
Listen to the latest songs, only on JioSaavn.com
"The main reason behind organising the cabinet meeting on Tehri Lake was to bring the lake and other tourist destinations of Uttarakhand on the world tourism map," he said, adding that the Tehri Mahotsav was also part of the initiative.

Employment opportunities generated by the all-round development of Tehri lake would percolate to people to Ghansali, Pratapnagar and Chinyalisaur, he said.