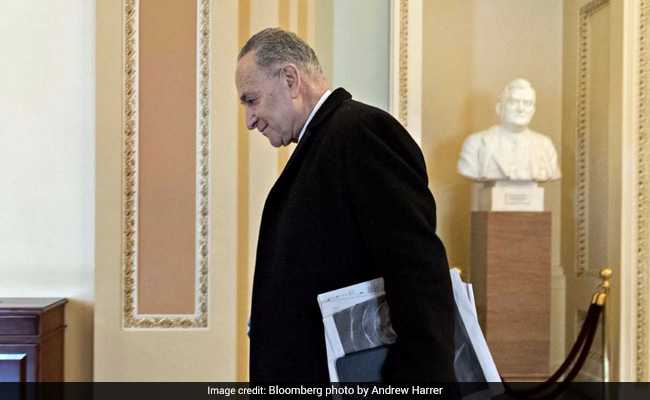 Chuck Schumer said he will use his 'clout' to make sure that US and India stay close together. (File)

US Senate Majority Leader Chuck Schumer has expressed solidarity with India and called for strengthening economic ties between the two countries.

"I'm going to find ways for Congress to continue promoting our two countries mutual defence, including working with QUAD members," the top Democrat leader said in his address.

"America is a whole lot better off because of the long strong and crucial friendship between India and the United States," Schumer said on Wednesday.

The democrat leader declared that he will use his 'clout' to make sure that America and India stay close together. "We will create new opportunities in this century to prosper together, and that Indian Americans are given the full benefits of life in America free of discrimination," schemer affirmed.

Schumer insisted that the two democracies must continue to strengthen and cooperate on the economic ties. "This means Congress must find opportunities to invest in the industries, critical to both our countries from biotech and semiconductors and information technology. These are good-paying jobs that strengthen both economies, but we also must work to break new grounds on the technologies that will shape life in the 21st century," the Democrat leader asserted.

Without naming China, Schumer said "rivals" around the world are investing in technologies like artificial intelligence, 5G, cybersecurity and how the US and India need to beat self-rule and countries that do not value democracy.

"I'm proud to say that a few months ago, the Senate passed bipartisan legislation that I put together and that will pass through the Senate that would make historic investments in these technologies, and at the same time using those investments to bring our two countries closer together," the Senate leader added.

Besides strengthing economic ties, Schumer also stressed how the two countries need to work together on common defence.

"At a time when the forces of authoritarianism, are making inroads across the world. It's vital that India and the US, the two large prosperous growing democracies, keep working together to stand up and proudly defend the right of all people to freedom and to equality."

Referring to the 9/11 and 26/11 terror attacks, Schumer in his address said the US and India have supported one another in the shared battle against terrorism. "India, you were there for us in the US and New York. When we were attacked on 9/11, and we likewise stood by our Indian allies when they were struck by the tragedy in Mumbai."

Touching upon issues like hate and bigotry, Schumer said that discrimination against Indian Americans is still not defeated. "I was so proud to stand arm in arm with the Indian American community and so many others and I made sure as Majority Leader, to pass the anti-Asian hate crimes bill this year in the Congress. But no matter how you slice it, hate and discrimination or unAmerican bigotry against one is bigotry against all," Schumer added.

Chuck Schumer, the leader of the Senate Democrats from New York, said that the Indian Americans directly influence and enriches his home state. "Indian American community, embodies what the American dream has always been about, of coming to the country, working hard, and when you work hard you help yourselves, you build a better life for your children, but you also enrich, New York, and our country," the leader said on top of his remarks.

While concluding his remarks, Schumer said that he will continue to forge policies that ensure a rational and steady stream of legal immigration, as well as student visas.