US Reaffirms "Unwavering Commitment" To India As Major Defence Partner

India-US Defence Ties: The leaders called upon the government and private stakeholders to use the existing ecosystems of innovation and entrepreneurship in defence industries for co-development, co-production and expanding mutual defence trade. 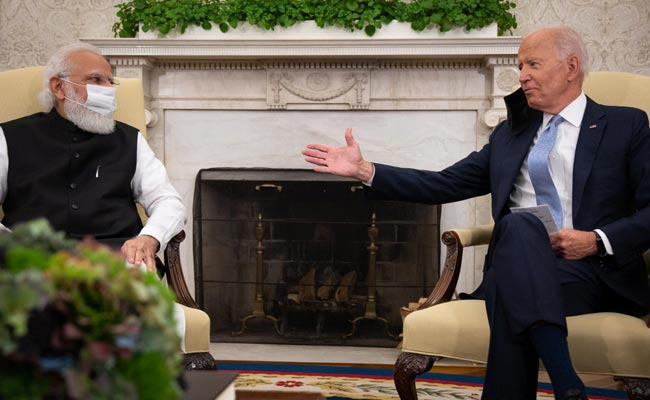 US President Joe Biden has reaffirmed his "unwavering commitment" to India as a Major Defence Partner through close engagements, including information sharing and strengthening cooperation in advanced military technologies.

During the first-ever in person bilateral meeting between President Biden and Prime Minister Narendra Modi at the White House on Friday, they also welcomed the deepening of advanced industrial cooperation and noted the recent project to co-develop air-launched unmanned aerial vehicles under the Defence Technology and Trade Initiative, and encouraged more such joint efforts.

"President Biden reaffirmed the strength of the defence relationship between the United States and India and the unwavering commitment to India as a major defence partner through close defence engagements in information sharing, sharing of logistics and military-to-military interactions, strengthening cooperation in advanced military technologies, and expanding engagements in a multilateral framework including with regional partners," said a joint statement issued after the bilateral meeting.

In 2016, the United States designated India as a Major Defence Partner. Commensurate with this designation, in 2018, India was elevated to Strategic Trade Authorisation tier 1 status, which allows India to receive license-free access to a wide range of military and dual-use technologies regulated by the Department of Commerce.

The leaders called upon the government and private stakeholders to use the existing ecosystems of innovation and entrepreneurship in defence industries for co-development, co-production and expanding mutual defence trade.

"They also looked forward to the inaugural meeting of the Industrial Security Agreement summit to facilitate high-end defence industrial collaboration," the statement said.

The leaders decided that the US and India must continue and expand their partnership in new domains and many areas of critical and emerging technology - space, cyber, health security, semiconductors, AI, 5G, 6G and future generation telecommunications technology, and Blockchain, that will define innovation processes, and the economic and security landscape of the next century.

They recognised the foundational need to address vulnerabilities and threats in cyberspace, including to promote critical infrastructure resilience, and welcomed the increasing partnerships among governments to counter ransomware and other cyber-enabled crime, including efforts to combat cybercriminals that operate from within their borders.

President Biden and PM Modi reiterated the importance of sustainable capacity-building and noted that mutual technical assistance efforts to respond to cyber threats should be prioritised and increased, including through dialogues, joint meetings, training and sharing of best practices.

"They looked forward to the finalisation of a Space Situational Awareness Memorandum of Understanding that will help in sharing of data and services towards ensuring the long-term sustainability of outer space activities by the end of the year," the statement said.