US, India "Committed" To Free, Inclusive And Prosperous Indo-Pacific

The approach of the US and India in the Indo-Pacific were outlined by Donald Trump at the APEC meeting last year and by Prime Minister Narendra Modi at the Shangri-La Dialogue. 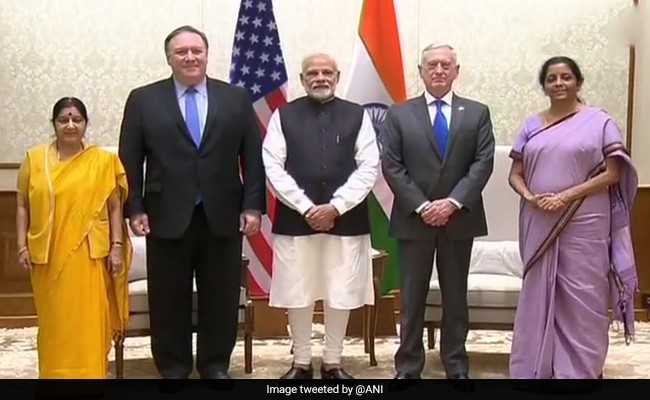 Amid increasing Chinese assertiveness in the Indo-Pacific, India and the US on Thursday vowed to work together towards advancing a free, open and inclusive region.

The two sides vowed to work closely for the peace and prosperity of the region as External Affairs Minister Sushma Swaraj and Defence Minister Nirmala Sitharaman held wide-ranging deliberations with US Secretary of State Mike Pompeo and Defence Secretary James Mattis during the first 2+2 dialogue in New Delhi.

"In the discussion of the four ministers at the 2+2 dialogue, we noticed a growing convergence of views between our countries, among others, on the Indo-Pacific," Ms Swaraj said at a joint press conference.

The approaches of the US and India in the region were outlined by US President Donald Trump at the APEC meeting last year and by Prime Minister Narendra Modi at the Shangri-La Dialogue, she said.

"We see the Indo-Pacific as a free, open and inclusive concept, with ASEAN centrality at the core and defined by a common rules-based order that both our countries are pursuing," Ms Swaraj added.

"Both sides committed to work together and in concert with other partners toward advancing a free, open, and inclusive Indo-Pacific region, based on recognition of ASEAN centrality and on respect for sovereignty, territorial integrity, rule of law, good governance, free and fair trade and freedom of navigation and overflight," a joint statement issued after the talks said.

Noting the importance of infrastructure and connectivity for the Indo-Pacific region, both sides emphasised the need to work collectively with the other partner countries to support transparent, responsible and sustainable debt financing practices in infrastructure development, it added.

Mr  Mattis said the two sides reiterated the "highest respect" for each other's sovereignty and committed to work together for a safe, secure, prosperous and free Indo-Pacific -- one that is underpinned by the rule of law.

"We appreciate India's role as a stabilising force on the region's geographic frontlines. Your nation understands better than many that peace and prosperity are only attainable when all respect the principles of territorial integrity, freedom of navigation, freedom from coercion," he added.

Mike Pompeo said, "We have a responsibility to advance a free and open Indo-Pacific that reflects those values: the rule of law, national sovereignty, good governance, protection of fundamental freedoms, rights and liberties, free, fair and reciprocal trade relationships and peaceful resolutions of territorial and maritime disputes."

Recognising their rapidly growing military-to-military ties, the two sides also decided to have a new tri-services exercise as well as to further expand the scope of jointly developing military platforms and equipment.