India's bid for entry into the 48-member NSG is being opposed by China citing that New Delhi is not a signatory to the Nuclear Proliferation Treaty (NPT). 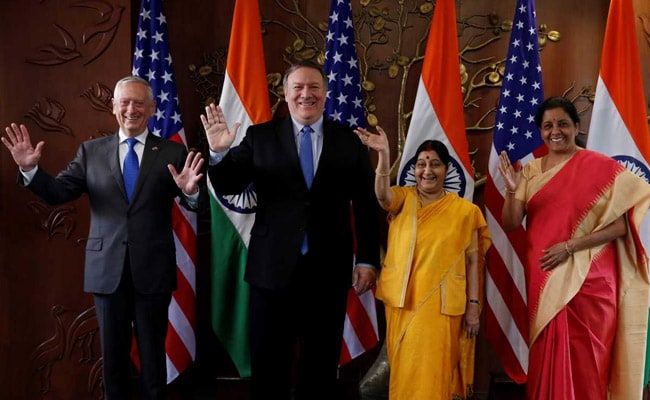 US and India held a landmark 2+2 dialogue in New Delhi today.

India and  US on Thursday agreed to work together to secure Nuclear Suppliers Group's membership for New Delhi at the earliest. The countries vowed to work towards this goal during their first 2+2 dialogue in New Delhi as External Affairs Minister Sushma Swaraj and Defence Minister Nirmala Sitharaman held wide-ranging deliberations with US Secretary of State Mike Pompeo and Defence Secretary James Mattis.

"In our meeting today, we also agreed to work together to secure India's membership of the Nuclear Suppliers Group at the earliest," she said.

"The United States welcomed India's accession to the Australia Group, the Wassenaar Arrangement, and the Missile Technology Control Regime and reiterated its full support for India's immediate accession to the Nuclear Suppliers Group," a joint statement issued after the talks said.

The Nuclear Suppliers Group (NSG) is an elite club of countries that deals with the trade in nuclear technology and fissile materials. India's bid for entry into the 48-member NSG is being opposed by China citing that New Delhi is not a signatory to the Nuclear Proliferation Treaty (NPT).

Mike Pompeo, in his remarks, hailed the civil nuclear cooperation between the two countries as an important component of their strategic partnership.

"Today also marks another milestone for our relationship. Thanks to the intense advocacy from the US, 10 years ago today, the nuclear suppliers group voted to allow India to trade in civil nuclear materials and technologies.

"That vote and the subsequent section 123 civil nuclear agreement opened a path for our strategic relations to grow, bolster defence and commercial cooperation and expanded our people-to people ties," Mr Pompeo said.

Both sides were committed to the full implementation of the civil nuclear energy partnership and collaboration between Nuclear Power Corporation of India Limited (NPCIL) and Westinghouse Electric Company for the establishment of six nuclear power plants in India, the statement said.

"We now look forward to what we can achieve over the next 10 years. In particular, we look forward to finalising the Westinghouse civil nuclear project that will provide clean and reliable power to millions of Indians," the US Secretary of State said.