"I don't find myself worthy to be part of the session of this august House until the government orders an inquiry or releases a statement over allegations of staging an attack on party MLA Brihaspati Singh," TS Singh Deo told reporters. 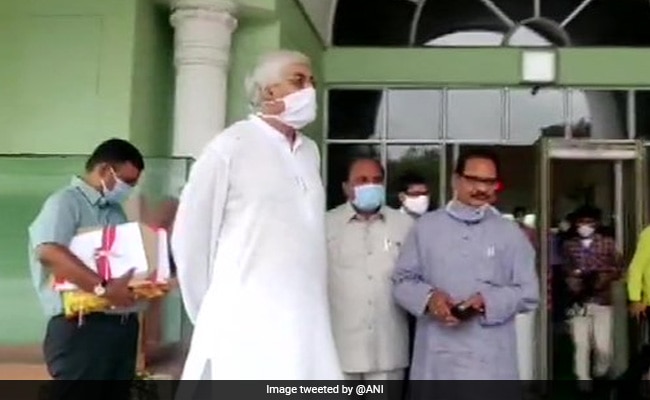 Amid the controversy over the alleged attack on a tribal Congress MLA, Chhattisgarh Health Minister TS Singh Deo on Tuesday walked out of the state Assembly and said he will not be part of the session of the House until the government orders an inquiry into the allegations against him.

"I don't find myself worthy to be part of the session of this august House until the government orders an inquiry or releases a statement over allegations of staging an attack on party MLA Brihaspati Singh," TS Singh Deo told reporters.

Even as Congress is trying to put its house in order in Punjab and Rajasthan, a tussle within the Chhattisgarh unit of the party emerged following an attack on the convoy of MLA Brihaspati Singh, who alleged that state Health Minister T S Singh Deo had orchestrated the attack on him.

Speaking to the media, Brihaspati Singh on Monday claimed his convoy, on way to an event in Ambikapur was attacked by a relative of Chhattisgarh Health Minister TS Singh Deo, and requested the party high command to "throw" TS Singh Deo out of the party.

The tribal MLA further said that his convoy was attacked because TS Singh Deo wants to become the Chief Minister of Chhattisgarh, and because he had said in the past that Congress High Command will decide the next chief minister candidate, the Health Minister wants to 'murder him'.

"On my way to Ambikapur for an event, a relative of 'TS Baba' (Chhattisgarh Health Min TS Singh Deo) chased one of our vehicles, snatched keys from the driver, and vandalised the car. He kept asking for me, but I had already left," said Brihaspati Singh after his convoy was attacked.

Asked if anyone can become the Chief Minister of Chhattisgarh by attacking a tribal MLA,  Brihaspati Singh said, "If he (TS Singh Deo) thinks that by killing four-five MLAs, he (TS Deo) will become Chief Minister, then good luck to him. I have apprehensions that besides getting me attacked, he can get me killed."

Appealing to Sonia Gandhi and Rahul Gandhi to throw TS Singh Deo out of the party, the MLA from Balrampur said, "To understand what my fault is, I found out that last month at a press briefing I had said that Chhattisgarh Chief Minister will be decided by the high command... I had only said this. Since then he (TS Singh Deo) does not respond to calls, his people hatch conspiracies."

The incident happened amid speculations of a change of leadership in the state as Bhupesh Baghel has completed half of his tenure in office last month.